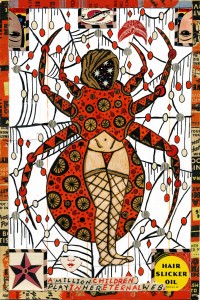 I once met Louise Bourgeois. She was a marvelous, elfin, dirty old French lady who made some of the most compelling sculpture and drawings of the last fifty years. She was a bit like licorice; you loved her or hated her. I loved her ferocious sculptures of spiders. Gigantic and full of feminine menace, they were present, for me, in a way that was unnerving. I remember the first time I saw one at the Tate Modern in London. I was standing on the balustrade above the piece. From above, it looked predatory, and when people walked underneath the giant arachnid, it looked as if she might just eat them. I say, “she” because they always seemed female to me, for no particular reason. They just did. I think this was part of  Bourgeois’ power as an artist, the ability to feminize a powerful figure without saying so. When I met her she was already in her eighties and she told me that “Boys become artists to fuck all the girls.” I replied that we certainly give it a good-faith effort. She laughed a greasy conspiratorial laugh and I liked her immediately. She wasn’t like anyone’s grandma. I was lucky enough, early in my career, to afford an etching of hers—it is a diabolical and yet friendly image of a spider with hundreds of baby spiders on her back, and she looks almost as if she is smiling.

Bourgeois died a couple of years ago. Always though, this time of year when I notice the spiders in my garden, I think of her.

She was ninety-eight-years old, witness to a century. She didn’t become well-known until she was in her seventies. As progressive a place as the art world pretends it is, it was still, for much of her life anyway, a boys’ network. In her lifetime, even the gallery’s owned by women mostly showed male artists. I don’t think it is any accident that so much of Ms. Bourgeois’ work was rooted in gender. In the end, she won. She climbed the art world’s mountain of nails and she got to the top—all ninety pounds of her.

Spiders have always scared the hell out of me. Only lately have I stopped killing them. They are incredibly useful, eating nits and mosquitoes and flies and lots of them—still, they give me the willies.

My favorite childhood story is about a spider: “Charlotte’s Web.” It is a beautiful meditation on the life-cycle, without all of the religious horseshit. At the end, when the hundreds of Charlotte’s babies are blown into the world, carried off like new hopes on the breeze, suspended by their silken-thread parachutes, I’d cry like a baby. My daughter, Gaby loved this story and for years would make me read it to her at bedtime.

Charlotte and Louise are a bit alike. Each lived long enough to spawn a new generation. Charlotte with her babies, Louise the many young women (and men) who will look at her work, in its perverse playful and sinister humor and take these ideas forward into their work and into the world. Hopefully they will also know something about just how nail-tough this woman was—enduring years of not being recognized—and always knowing that this thing she did was a marathon, and not a sprint. Louise was in this for the long game, for the best reason—she was an artist and artists have no choice but to be who they are and to make what they make. So, here is to remembering fondly that magnificent, dirty old French broad. Bless her.