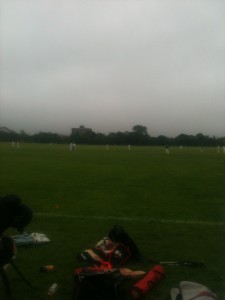 Cricket is a gentlemen’s sport. Requiring patience, skill, and knowledge of sporting minutiae, the British propagated it across their empire, infusing the local cultures with an athletic outpost of the British “stiff-upper-lip” mentality.

And then there’s real cricket. The brutal bat-and-ball sport that you find in the alleys of Bombay, along the beaches of the Caribbean, on Australian news channels and in the South Side’s very own Washington Park. Yes, each weekend, from May to September, Washington Park hosts the Midwest’s largest cricket league.

Although the Washington Park cricketeers are almost entirely South Asian, they, as one player told me, “come from all walks of life.” And, despite the incongruity of the University of Chicago’s ivory towers on one side and the grit of Englewood on the other, the teams are driven to their cause. Shankar, a bowler for the Chicago Mavericks, told me that players arrive at 8am to set up and often leave at 6pm once all the games are over. To play on both days of the weekend: “you have to be committed…or single.”

On this pitch, however, relationships between man and woman seldom occur. In fact, among the six teams and hundred or so players on the field, only one woman was present, the mother of a teammate. For the players themselves, the only charged interactions can go on between ball and bat, bowler and batsman, or player and player.

As a result of this tension, insults are flung and trash is talked. Unlike in other sports, where verbal eruptions of passion may result in a technical foul, or ejection from the game, in cricket these are encouraged, under the banner of “sledging.” All the cricketeers at Washington Park know about sledging, and many engage in it. As Rup Seenarain, a Guyanian immigrant of subcontinental heritage who referees games, says, “You have to do it! To an extent it is okay, but it is part of the game.”

Sledging can be a larger part of the game for some than for others. As Shankar readily told me: “some teams can be notorious.” One such team is the Purdue University cricket team, an all-international student contingent that regularly drives up to the pastures of Washington Park to wrangle up cricket. That day, Purdue was playing United, a Pakistani-dominated team based out of Chicago. Although their native dialects of Urdu and Hindi were all Greek to me, the basic insult of laughter after a fall or boos for the opposing team got through. When a cricket ball shot at one player and nearly broke his hands (all cricket balls are made of wood), the opposing team cackled with joy. Even between rounds of play, team members would gather and point out different players of the opposing team that were messing up, muttering and snickering about their inferiority. However, Gaurav, a bowler at Purdue, says, “it’s supposed to be a gentleman’s game. Fierce on the field, but brotherly off.”

And for the most part, it is. The history of cricket in Washington Park bears no mars of conflict, going back into its founding. But then, no one on the field is exactly sure of when cricket began to be played in Washington Park. Shankar from the Chicago Mavericks quickly conferred with his teammates in Hindi before saying that it probably started in, “the sixties or seventies,” while a middle-aged player from United named Adnan vaguely says, “over twenty-five years ago.” Even Rup the Ref can give no precise date, merely placing the founding as “way back in the days.”

People are, however sure about Washington Park’s unique standing with respect to the availability of cricket. Enter Referee Rup Seenarain again, speaking in the melodic tones of the Caribbean: “You know, way back in the days, in the 1990s, this was the only designated cricket field in Chicago.” The Park District still goes out of its way to make the South Side into the Midwest’s cricket mecca, setting up four cricket pitches in the park each summer, and reserving the field for the cricketeers each weekend all summer.

Washington Park allures cricketeers for its convenience—everyone I spoke to was more than satisfied with the grounds, and occasionally interacted with local South Siders, trying (sometimes in vain) to explain the game’s byzantine rules to them. For the cricketeers themselves though, the allure of the game resides not in the sport itself, but in what it recalls. “We all grew up playing the sport,” says Gaurav. According to Adnan: “The sport just kind of stuck with us.”