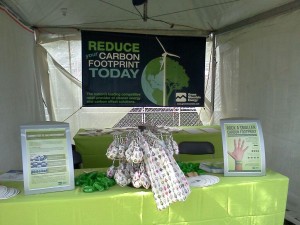 Part of the Official Guide to Lollapalooza’s Green Street

How much carbon do you emit in a given day? Between a combustion-powered commute and an AC-filled summer, from a solitary camping trip to a transcontinental flight, the numbers vary wildly. High-octane events, like Lollapalooza, can pump carbon into the atmosphere, while even incidental activities (riding the El, for example) contribute to an overall passing of atmospheric gas.

If you plan on going to Lollapalooza, you can neutralize this by engaging in Lolla’s Tread Lightly program. Lollapalooza, in partnership with Green Mountain Energy, is offering a three-dollar carbon offset to help the average concertgoer reduce his chemical footfalls among the melodic hubbub. Green Mountain Energy, normally a renewable power provider, wheels and deals in carbon offsets as well, all for the benefit of Lolla’s concertgoers, and for the environment that we all share.

But then, what is a carbon offset? After all, Lollapalooza’s three-dollar Tread Lightly Green Mountain Energy Offset supposedly, “offsets 220 pounds of greenhouse gas emissions and helps reduce the impact of your travel to the festival.” Jennifer Clymer, environmental affairs manager of Green Mountain Energy, calls an offset, “a way for people to take responsibility for the environmental impact they have in a cheap and easy way. It represents CO2 and other greenhouse-gas emissions that are either reduced, or are not created in the first place.” To put it in directly quantifiable terms, Clymer says: “one carbon offset equals one metric ton of carbon dioxide. One metric ton is basically twenty-two hundred pounds.” From whence comes your three-dollar, 220-pound offset, a tenth of one full offset of carbon. The three-dollar price tag isn’t arbitrary, as Clymer will tell you: “there are standard market rates for how these offsets cost, so we tapped into that and determined that three dollars was a reasonable amount for the emissions that [concertgoers] are avoiding by purchasing [that offset].”

So how are those emissions measured? Green Mountain Energy does the grunt work here, and goes around Lollapalooza tallying up the various sources of carbon. Clymer says that much of the offending vapor comes from power generation—“diesel and gasoline generations”—from all travel to and from the event (both staff and bands), as well as vehicles used within the event, be it golf carts or dune buggies.

As to your specific greenhouse gas contribution to Lolla’s carbon footprint, ask not for whom the generator burns; it burns for thee. By virtue of your participation in the festival, your emissions are counted. Thus, the offset, while measured off of Lolla’s emissions, recognizes your involvement. Contrary to what one may expect, the offset does not include post-Lolla waste, meaning that the Tread Lightly program fails to counterbalance litter and garbage. Better aim for the recycling bin, then.

How does Lolla’s offset work, then? Green Mountain Energy takes the carbon toll, and markets the offsets, but where does the grit and grime of gas balancing come in? Look no further than Tazewell County, Illinois, home of the Indian Creek Landfill Gas Project, where your carbon is offset.

The Indian Creek Landfill Gas Project does not extract carbon or greenhouse gases from the atmosphere so much as it prevents further contamination. Landfills tend to accrete gas over time. Indian Creek has been in operation since 2008, with forty-five million cubic yards of space and forty-three years of time left to fill. So, as time wears on, more gas builds up and leaks out. While many landfills contentedly let these harmful gases (methane chief among them) seep into the atmosphere, Indian Creek has funding to divert and destroy these gases, preventing many pounds of harm from being inflicted on the atmosphere. The offsets help fund Indian Creek in its gas-destroying efforts, as well as ensure that the expansion of the landfill is met with equal expansion of gas-fighting materials.

This, the final aspect of your multifaceted carbon offset, undergoes inspection and analysis from Climate Action Reserve (CAR). As President Gary Gero says, CAR gives Indian Creek and, by extension your three dollars, “the organic seal of approval for greenhouse gas offsets.” Green Mountain Energy contracts with CAR to ensure that you can count on the positive effects of your carbon offset. CAR’s gold standard of approval means that Indian Creek isn’t some sham offset ring; it’s the real smelly, proactive deal.

That’s not to say that your offset, or your lifestyle will have fallen entirely without criticism. Guardian writer George Monbiot compared carbon offsets to the indulgences of the Catholic Church, writing that, “you buy yourself a clean conscience by paying someone else to undo the harm you are causing.” But then, that’s where Climate Action Reserve and Green Mountain come in. Clymer points out that “we’re always trying to promote everything you can do to reduce your own impact first,” while Gero notes that Illinois state law does not require Lollapalooza to do anything on behalf of the environment, saying, “the fact that they’re taking the time and money to verify the offsets is really commendable.”

And, as Gero also said, “offsets are intangible reductions of greenhouse gases.” On both ends, the problem lacks substance—no Lolla concertgoer sees the fumes behind the sound systems, while those who purchase the Green Mountain Energy Offset won’t notice the absence of landfill gas in their—and our—air. So while Treading Lightly and the Green Mountain Energy Offset are climate coups for Lollapalooza, they are also real examples of conservation for the common citizen.