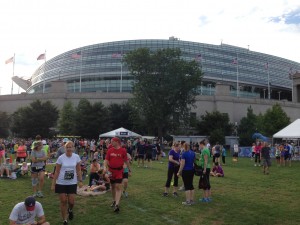 Breakdown: Moving from pre-Lollapalooza to post-Lollapalooza may have brought down registrations a bit (from 3, 543 last year to around 2,500 this year) but last night’s Terrapin 5K and Music Festival still felt like an appropriately large running event. The word “event” here is especially important to take note of, as the 5K is just the opening act to a whole night of festivities. But I guess if we’re being technical, the 5K isn’t even the opening act. By the time the race kicked off at 7pm, three bands had already performed on two separate stages. It’s definitely an event.

Pace groups were released a lot quicker than expected at the starting line along Waldron Drive, with a dual-release (A&B, C&D, etc.) speeding things up. The course, unchanged from last year, allows for plenty of runners without too much crowding, even when it converges on the open Lakefront Trail. But while the race is smoothly run and well-coordinated, it’s the post-race party that people really show up for.

Covering the entire south side of Soldier Field, festivities really start to kick into gear when the race is over. The main stage (aka “East Stage”) is on the grassy lawn on the southeast corner, along with food and beer tents and a secondary stage (aka “West Stage”) sits on the walkway to the southwest of the stadium. Runners, spectators and people who just like music gather on blankets and chairs to enjoy the food (corn on the cob and a burger or hot dog) and beer (312 and Green Line) while taking in a night of music that lasts until 10pm. The weather last night dipped into the high sixties but still felt perfect for post-race partying.

Course: Kicking off in waves just south of Soldier Field and heading out through the McCormick Place tunnel, the course headed south to 31st Street before turning around and following the Lakefront Trail north after the course’s sole water station. It was nice to have an out-and-back where the “out” and the “back” were on different trails.

Organization (gear check, etc.): For the most part, RAM Racing has events like this running like a well-oiled machine. There was a slight back-up at post-race gear check as most people in the same corral were also in the same number range—meaning everyone’s trying to get their bag at the same time. And the longer it takes you to finish the race, the longer you’ll wait for your food and beer.

Goodie Bag (includes shirt): Last year’s shirts were stylish but the two-toned blue and tan tees this year were a step up even from those. The design is a bit simpler and more impressive. Race entry also included tickets for post-race “munchies” (corn on the cob and a burger or hot dog—served on a Terrapin frisbee) and “brewski” (312 or Green Line).