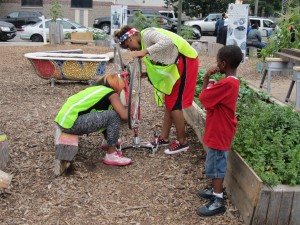 As I pedal up to the Bronzeville Community Garden, 51st and Calumet, on a Wednesday afternoon, smooth R&B drifts from a sound system and folks are gathered around a table made of colorfully painted repurposed wood, gazing intently at a chess game. Planter boxes hold a variety of greenery, including tall stalks of corn, and an old bathtub covered with a swirling mosaic design sits full of soil that’s ready for planting.

Soon a group of ten teenagers will show up on mountain bikes to make improvements to the garden and do free bicycle repairs for community members. They’re apprentices with the Greencorps Chicago youth program, a project closely aligned with the Chicago Department of Transportation’s new Divvy bike-share system.

The planned coverage area for Divvy’s first 400 docking stations stretches from 63rd to Devon, including a number of low-income neighborhoods like Bronzeville, and CDOT has applied for funding to further expand the system. However, many Chicago communities won’t be getting bikes during this first round of installations.

To help make sure bike-share benefits all Chicagoans, not just those in the initial coverage area, there’s a job-creation element to the program. Roughly twenty percent of the Divvy work crew, about twenty people, was hired through Skills for Chicagoland’s Future, a job-training program for unemployed people. Other bike-share employees are graduates of adult programs offered by Greencorps, a CDOT division that trains ex-offenders and people recovering from substance abuse in environmentally oriented fields like landscaping and urban agriculture.

In addition, the city’s contract with Alta Bike Share, which runs Divvy, includes a requirement for the youth program, which is being run by Greencorps in cooperation with the Department of Family and Support Services. Six-hundred teens from violence-prone neighborhoods were selected for paid apprenticeships, receiving six weeks of training in bike safety and repair, as well as horticulture.

One-hundred-twenty of the top-performing participants will continue to work for Greencorps for ten hours a week throughout the school year. After that, about twenty of those teens will be hired as apprentices at Divvy, helping out with assembly and maintenance of the bikes and stations, and assisting the crew with “rebalancing,” relocating cycles from one station to another. Other graduates of the program are likely to find jobs at nonprofit bike shops and urban farms.

CDOT assistant commissioner Sean Wiedel and Greencorps program director Edde Jones meet me at the community garden to tell me more about the apprenticeships. “There are youth in this program who are basically the type of kids who said they didn’t go to school, didn’t bother, didn’t show up,” says Wiedel. “Suddenly they’re coming to this program and they’re loving it.”

Some of the tasks that the kids who work at the Bronzeville Community Garden have been doing include reclaiming wood from a nearby building teardown, pulling the nails from the planks, and building gardening beds and a fence, as well as salvaging old bricks to build cold frames—miniature greenhouses used to extend the growing season. The students will also be mulching, planting ornamentals and vines, and cultivating Echinacea plants in the bathtub to attract butterflies and bees.

The teens roll in, after biking three miles from their classroom at 2929 South Wabash, with their instructor Jason Sonnefeldt and “mentor” Victor Rollins. Sonnefeldt explains that about half of the teens from his class are missing today, but they’ve got a good excuse: they’re on a field trip with the nonprofit Upward Bound, visiting a college campus.

The instructor tells me how he got the kids into biking shape. “We started going on casual, leisurely rides to get their muscles warmed up,” he says. “We went north to the Shedd Aquarium one day, and that was about six miles,” he said. “And then we went south to Promontory Point, which was a ten-mile ride. I’ve been pushing them pretty hard, so that way when we ride to the garden it doesn’t feel so bad.”

“This program is teaching the kids to get actively involved in their communities and it teaches them to make creative change,” says Rollins, who has ten years of experience working with at-risk youth. “A lot of the things that they’re seeing within their neighborhoods are very negative. This helps them to empower themselves and give back to their community.”

The teens come here every Wednesday to fix bikes. Today a couple of adults show up with flat tires, and the kids are ready with patch kits and pumps. One boy stands on the corner holding a sign advertising their repair services. A carpenter who’s volunteering with the program shows up to help the students break up concrete to make room for the new fence.

Brian Davis, eighteen, tells me that after a few weeks of training, he now feels comfortable doing bike repair. “I know how to patch inner tubes, put a new inner tube in, and put a bike together,” he says. “We go around and fix bikes, plant plants, and help the community out. The riding is fun too; it just takes a little while to get used to it.”

After successfully tag-teaming a flat repair with another girl, Tonaa Jamerson, seventeen, tells me she was surprised by how much she enjoys wrenching. “At first I thought only the boys need to do the mechanic work,” she says. “But Jason showed me how easy it is to fix a flat. It only takes five minutes and it makes a lot of people happy.”