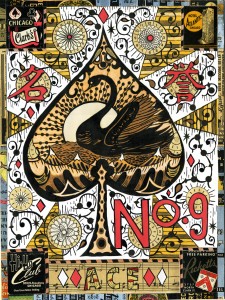 Some years ago, I made some drawings all with different kinds of “Ace of Spades” motifs. I had planned a big series about my father, whose nickname was “Ace.” I stopped after making six of them. The ones I made were terrific, but emotionally brutal to get through.

My father loved games of chance–blackjack, poker and the Lotto. He often bought 15-to-20 “Quick Picks” a day. He was a child of the Depression, the Irish Sweepstakes and “policy,” a game more known by its other name, “numbers.” He had a gambler’s optimism to the point of being delusional about the Lotto. I once tried to explain the math to him, since the State of Illinois basically made the numbers racket legal and called it Lotto in 1973. I surmised that my Dad had spent, conservatively, a couple of hundred grand on Lotto tickets between 1973 and 1997. He wouldn’t hear of it being a sucker-bet, noting that in the mid-eighties he’d once won five grand. When I tried to explain the long-term calculus of this, he told me to mind my own fucking business.

The Irish are superstitious this way—raffles, pools, games of chance—we’re suckers for it. It’s not an accident that bookmaking is legal in Ireland. We believe in the vagaries of luck.

My father and I had a complicated relationship; I put many gray hairs on his head. I got in an immense amount of trouble; the only one of my siblings to do so. I rejected the Catholic faith that he and my mother held dear. I hated school and authority, and thought my teachers were mostly dip-shits (with a few exceptions, I wasn’t wrong). I only wanted to draw pictures and be left the fuck alone.

My father, for the life of him, could not figure out how a person was going to make a living drawing pictures—what I mistook for anger was actually fear. My parents were children of the Depression, and all around them, real Americans starved to death outside of grocery stores. Poverty was not an abstraction—but a palpable and ever-present entity with definable features. It wasn’t happening to someone else, but to their neighbors and relatives. What he feared is I would be unable to support myself.

When I finally told him I wouldn’t do anything but draw pictures because it was the only thing that meant anything to me—he pulled the car over and pointed in my face and hollered,  “Then do it like you’re fighting a war, like your life depends on it!” I said “what do you mean?” He looked at me and said very evenly, “Not one step backwards.”

My father and I often battled at the dinner table. He would tell me that at my age he was off fighting a war and I didn’t know a goddamn thing about the world. My father invaded Okinawa in WWII; a bloody, bestial engagement in which Americans took the islands inch-by-bloody-inch in some of the ugliest warfare ever engaged. I never knew. My father did not discuss the war other than to say I had no idea. He was right. You couldn’t get him to a war movie—he thought John Wayne was a pussy. Mostly he thought the idea of war movies as entertainment was obscene.

He was a patriotic guy, but eventually the endless news from Vietnam in the late sixties and early seventies—night after night of carnage and American boys dying needlessly—wore him out. I always thought that those news reports awakened his own experiences and he was not anxious to relive any of this. The more I think of this, the more I credit the American news media with helping undo our appetite for war as a country.

Because there it was, every night at dinnertime—the latest body count, until we the people would no longer have it. The Vietnam War certainly schooled the Pentagon: In the Gulf Wars, reporters were “embedded” with  troops and the  military manhandled the media into reporting its version of the truth, and we were only too willing to buy the FOX news version, or the CNN pablum. Casualty counts were prohibited. The filming of American  coffins prohibited. Nobody wants to look at their smoking guns. And forget what our drones do to civilians. I guess they figure if we cannot see it, it isn’t happening.

The day my father’s ship, The U.S.S. Noble, approached Okinawa, he saw a flock of black swans lolling on the waves miles off of Okinawa. Like black roses on the water—he remembered this is when he started to be afraid.

At the end of my dad’s life, when he was in hospice, I would visit him every day and try to have conversations. It was difficult given that he was on a morphine drip.  He would often tell me there was a Japanese soldier in the hallway.  I thought maybe my father was mistaking one of the doctors for the soldier, but he said no. He kept insisting there was a Japanese soldier lurking in the hall. That every once in a while the soldier stood in the doorway and smiled at him. I asked him why he thought he was out there and my father replied, “To forgive me.”