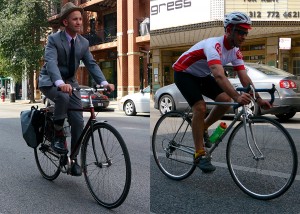 I first heard about the “Mary Poppins Effect” back in March 2011 from local bike blogger Dottie Brackett, also known as The Martha Stewart of Chicago Cycling. “This is basically the idea that drivers are nicer to women bicyclists riding upright bikes with dresses and flowing hair, ” she wrote on her site Let’s Go Ride a Bike. “Who could be mean to Mary Poppins?”

On the other hand, it’s believed that motorists are less likely to operate safely around people wearing bike-specific clothing, bent over drop handlebars on a racing bike. “A cyclist dressed ‘normally’ looks more human to the driver,” wrote Dottie’s Massachusetts counterpart Constance Winters, who coined the term for the phenomenon on her blog Lovely Bicycle two months earlier. “The more ‘I am human! I am you!’ signals we give off when cycling, the more empathy a driver will feel towards us. Dehumanization, on the other hand, makes it easier to cause harm to another human being.”

I was interested in testing out the theory by having one of my male bike buddies pedal downtown in a suit, then in Spandex, while I followed behind taking notes on motorists’ behavior. There were no takers at the time, so I added the idea to my potential story list and promptly forgot about it.

Fast-forward two-and-a-half years to Tuesday of last week, when I was scanning the headlines over my morning coffee. Lo and behold, a Tribune story described how Van Dyke miraculously escaped unscathed after his Jaguar caught fire on a Los Angeles freeway the previous afternoon.

“Somebody’s looking after me,” he told a TV reporter from local station KTLA5, looking chipper as ever. “At first I thought I had a flat. Then it started smoking, then it burned to a crisp.” Later that day he tweeted, “Used Jag for sale REAL CHEAP!!” How many eighty-seven-year-olds do you know who use Twitter?

Inspired by Van Dyke’s obvious joie de vivre, I resolved to test out his eponymous effect, even if I had to serve as my own guinea pig. My blogging partner Steven Vance agreed to follow behind me with a camera as I rode downtown and observe how closely drivers passed me.

That afternoon I put on the pinstripe suit I bought in Bangkok and a straw fedora and began riding my Dutch-inspired cruiser down Milwaukee Avenue from Logan Square at 2:50pm, feeling like William S. Burroughs, the well-dressed author of “Naked Lunch.” When we come to a stoplight, Steven tells me that some drivers are crossing the yellow line to give me plenty of room as they pass me. As I roll past a bus stop at Oakley Avenue, a young man on the bench gets a load of my get-up, grins and nods his head in approval.

We turn east onto Chicago Avenue and roll into River North. Around Wells Street, Steven reports that a cabbie switched lanes in order to pass me. We continue south on Clark Street, where motorists are generally driving in the other travel lane rather than sharing lanes with me. When we arrive at Daley Plaza, we remark that no one had honked or catcalled at me the entire time.

The following afternoon I squeeze myself into some Spandex, which I never wear in real life, strap on a helmet and wraparound shades, and mount my skinny-tired road bike. As Steven and I depart at 2:50pm again, I feel less a distinguished Beat writer and more like a space alien, and more than a little self-conscious. We take the same route and, despite my garish apparel and insect-like posture, I seem to get a fairly similar reception from drivers.

When we reach the plaza I ask Steven for his conclusions. “I think whether a driver passes a cyclist with more or less space is based ninety-nine percent on how much open space the driver has to the left of his or her car,” he says. “There didn’t seem to be a Dick Van Dyke Effect.

“However, I did hear about a guy who bicycled wearing men’s clothing, and then made the same trip wearing a dress and a wig,” Steven added. “He found he got better treatment when dressed as a woman. That would be the next thing to try.” But that’s an experiment for another day. Oh, the things I do for science!