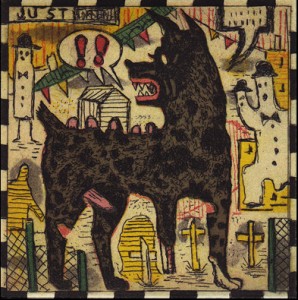 In theater, nobody likes the guy who chews the scenery, the hammy asshole who treats every line like a star turn. It seems unnatural and doesn’t allow the audience to adequately suspend disbelief.

In politics, this style of jambon behavior is the coin of the realm. We had a choice episode of this the other night at Jones College Prep, in the South Loop. It seems that Alderman Bob Fioretti got it in his head to try and glom some of Rahm Emanuel’s screen time while the mayor was playing his best role: the heart-wrenching and deeply dramatic “I give a fuck about public schools.” Which, perhaps, is more aptly titled “I give a fuck about public schools in white neighborhoods.”

After getting his ass handed to him by the teacher’s union and then shuttering fifty Chicago public schools, Rahm loves cutting ribbons at schools.

Fioretti had wanted to ask Rahm about his decision to allow doubling the number of students allowed to test in, rather than converting the old Jones structure into a neighborhood high school. Rahm’s toads stopped Fioretti from entering the media gathering and broomed his ass into a “tour” of the new facility in order that Rahm, rather than looking like he cooperated with the 2nd Ward alderman (he didn’t) or the local community (he didn’t), could look more the way he is accustomed to being perceived—as one who governs by edict. Boss-like or—dare I say?—Daley-like.

Fioretti isn’t innocent in this pitiable little comedy either; in the face of the most dire crisis of public education that perhaps this city has ever experienced, he too, was out to score cheap political points. Generation after generation of our city’s children sink into the mire of poverty, crime and hopelessness, and all these creeps can do is try to wring some political currency from it.

Sometimes, one despairs of the species.

I always wonder when Emanuel pulls his churlish, sneering act with the press, why nobody ever reminds this imperious little pork-sword that he is a public servant. To put a finer point on it, he is our employee, not the other way around. Maybe it’s time to remind him to be wary of hubris. As usual, I have five ideas that should help humanize the Terror of Tiny Town:

1. Once a week, Emanuel and every other elected official should wash a citizen’s car—scrot to throat—wheel-wells to the hard-top interior, upholstery, the whole schmear.

2. The mayor himself should stand out on a different “Safe Passage” route every week—in fact give him a patrol-boy belt and let him walk kids and the elderly across the street.

3. Can you think of a better job for elected officials than walking the public parks and performing dog-shit removal? Don’t thank me. Ideas is my middle name.

4. The mayor and all of the aldermen should shovel some of the walks in their respective neighborhoods. See, in a lot of parts of town, they don’t bother plowing the streets anymore. They should particularly do this for the elderly folks who are more prone to slip and fall in this weather.

5. While doing these duties, Rahm and all of the aldermen should be made to wear those neon-yellow dork-vests to City Hall all day long, because I don’t know anyone who doesn’t want to kick those guys in the nuts.

This won’t happen. A political operative I know told me Rahm will probably be mayor for as long as he wants to be. He’s not daft enough to think he could be president. In Illinois, the mayor of Chicago is a better and more powerful position than a senate seat. The discretionary power of a big-city mayor is astonishing. The only more powerful position in this state? It should be the governor’s job but it isn’t. It’s Speaker of the Illinois House of Representatives and Chairman of the Democratic Party of Illinois Michael Madigan—a fixer, arm-twister and resident crypt-keeper (really, somebody water this guy) in Illinois politics since 1981.

It was Madigan’s chicanery that cost the gay citizens of this state the house vote on gay marriage—in order that Mr. Madigan could cost Governor Pat Quinn a political victory. The political landscape Rahm, Madigan and their ilk occupy is so low and slimy and dark that the lizards don’t have eyes.

I didn’t realize when Rahm started his ascent with President Clinton years ago, how much he and Clinton would change the definition of Democrat. Twenty years ago if a mayoral candidate, particularly a Democrat, attempted to throw labor under the bus? He’d have found himself alone and staring up his own hole.

Rahm and Clinton were the Democrats who ushered in the “squishy” people—the pro-death-penalty, anti-labor, pro-three-strikes law, pro-NAFTA Democrats—the fungible, for-sale element that has run the party ever since. “Our core beliefs bother you? We’ll change them—we are the NEW malleable Democratic Party.”

In the meantime, we have less educational and economic opportunity—more crime, more poverty and more meaningless ribbon cutting. So, while Rahm Emanuel and Alderman Fioretti get their cheap popcorn fart of a headline? The beasts are winning.

It’s the War on the Future, my Irish-American brother. Shutter 50 schools to fund NATO summits that no Chicagoan can get within two miles of – then pay tons of cash to keep the lights on in those schools and keep meth labs and squirrels from breaking in. Pander to corporate bigwigs who promise to bring 30 jobs downtown from Seattle or the suburbs (and don’t), and then sell off our parking meters. Raid the state and city worker pensions for today’s garbage pickup – the future doesn’t ever get here, right? All hail the Eternal Present, the gift that… Read more »

Let them actually use the irritating, time-wasting meters; let them sit on the new El cars with someone’s ass in their face for the first 45 minutes of every morning.