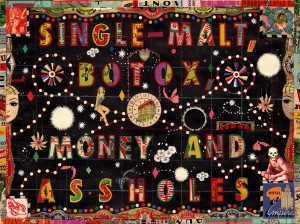 Every once in a while I try to get on the “Chamber of Commerce” side of art fairs. They bring in a lot of money to the city and everyone benefits: hotels, restaurants, clubs, bars, pedicabs and hookers. Everyone.

One has to admit that last year’s Expo Chicago did very well, considering the deep hole it had to crawl out of courtesy of the Merchandise Mart’s assiduous “branding” of all things art fair. In their incarnation, the phrase “art fair” became a dirty word to me—and remains so.

Still, in fairness, one must credit Tony Karman for resurrecting what had become a moribund concept in Chicago: a Chicago art fair. With sheer moxie, unflagging salesmanship and brutal optimism, Karman pulled it off. I don’t know him well, but well enough to tell you that he is impossible to dislike. Believe me, I’ve tried. The guy is eternal sunshine. Show him a barn full of horse manure and he’ll tell you to look for the pony.

This event rising from the dead is due to him. And this is not a small thing. And after much griping and bitching, I’ve come to believe it is a good thing.

I’ve come to realize that art fairs they are a permanent part of the landscape whether loudmouths like me like them or not. Last year, after seven years of avoiding them, I went to Miami for the Art Basel rolling goat-fuck and found, among the eleven or twelve satellite fairs, that a few of them had remembered to put ideas about art front and center. Despite not liking these things, I had a good time and discovered new things. I also had come to realize that art fairs had bred a whole new class of collectors who build their travel around the art-fair calendar, like Deadheads with money. A good many of them never set foot in a gallery—ever. They only buy their art at fairs. I came to a realization that most dealers cannot afford NOT to be in art fairs—they’ve been consumed by the monster of their own making.

The kids I brought with me had a blast—they’d never been to one of these turkey-shoots before. Their enthusiasm was contagious. One young printmaker, Tyler, found himself wearing a diaper and laying under a naked French girl. I told him to keep doing what he was doing, that whatever it was, it certainly amounts to art by someone’s definition.

I began to dislike art fairs when they stopped being about art. In 1980, nobody would have ever thought to label Art Expo a trade fair. By the mid nineties, this term had the tacit approval of its participants. Instead of art and artists shaping the discourse, the market did. Collectors began to know the price of everything and the definition of nothing. The buzz became about what it cost rather than what it was.

The opening night of art fairs became prom night for the assholes, a chance to go out and waltz with their wealth, in the adoring reflected glare of the art world.

What I would like to see happen with art fairs? Glad you asked.

1. Use the whole city to extend the fair to two weeks and have booths, performances, exhibitions and soirées citywide. Chicago can keep anyone well occupied for two weeks—let visitors take in the whole of our city. Let our citizens who may not have the twenty bucks admission see artists, dealers and performers plying their trade and aesthetic in their own neighborhoods. This would enrich possibility for both groups and start a very necessary dialogue. Why hide all of these cultural riches from those who most badly need to see them in an art mall?

2. Include, embrace and encourage a broader understanding of street art, which encompasses a great many more medias, cultures and definitions than we now know. Graffiti is only part of it.

3. Include theater, dance and music—our city pretty much rules at these art forms. Let’s flex those muscles as well as long as we have an audience. These added elements will attract MORE paying customers and lend support to the idea that in Chicago, all of the arts are part and parcel of our distinct culture and as a cultural entity, we are second to nobody.

4. Keep the politicians away. With the exception of the perpetually decent and honest Governor Patrick Quinn, the rest of them, from Emanuel and Madigan on down, are Dickie Dope and the Fuck-Around Crew and the rest of the country knows it. They don’t give a fuck about art. This setting makes them appear that they do. So keep them away, or make these slap-dicks pay twice.

These are a couple of ideas, a good departure point.

I realize you need the wealthy to make these things fly, but don’t make this private property. No matter who is the temporary custodian for a work of art, in the long haul, it is the property of a culture. It belongs to the future. We celebrate art because it is an affirmation of life—no matter the zip code.