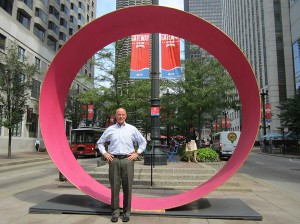 Michael Edwards with the “Give” sculpture at The Gateway/Photo: John Greenfield

The State Street shopping district has come a long way since the seventies and eighties when the strip featured a motley assortment of discount stores, theaters showing exploitation flicks, adult bookstores, strip clubs and flophouses. The thoroughfare has bounced back since the 1996 State Street Revitalization Project, which put in the classy Beaux Arts fixtures we enjoy today, and is once again a vibrant retail corridor.

But the Chicago Loop Alliance, one of the downtown chambers of commerce, is always looking for ways to attract more visitors to That Great Street. One of their key strategies is “placemaking,” taking underused public spaces and activating them with facilities and programs that encourage folks to hang out, relax and socialize.

The chamber’s Pop-Up Art Loop program turns empty storefronts into temporary galleries, which are promoted with monthly art walks. Earlier this summer the CLA and the Chicago Department of Transportation installed tables, chairs and planter boxes in an existing plaza on the median of State between Wacker Drive and Lake Street, now called The Gateway. Last week “Give,” a fourteen-foot-tall circular steel sculpture by Chicago artist Dusty Folwarczny, was installed at the foot of the plaza.

On Thursday, September 12, from 5pm-10pm, the chamber will turn Couch Place, an alley just north of Randolph Street between State and Dearborn Street, into a temporary art space called Activate. Attendees will enter through an arch made of LED backlit brick. Once inside they’ll enjoy an art exhibition, a fashion show, music, circus performers, parlor games and free libations. I met with CLA executive director Michael Edwards at The Gateway last week to discuss how these projects fit into the chamber’s goals.

Every year the Chicago Loop Alliance has done some kind of placemaking initiative on State Street. You had Tony Tasset’s “Eye” sculpture in 2010, and you had Kay Rosen’s “Go Do Good” installation in 2011. What’s the reasoning behind doing a big project each summer?
The original idea was to create a destination for people to come into the Loop. Those projects were fantastic and they got us a lot of global impressions, but they were extremely expensive and very time consuming, and they were a three-month kind of project. So we’re looking for ways to activate the Loop that are more sustainable.

It seems like The Gateway is a success. You’re getting forty to fifty visitors per afternoon. This was an inexpensive way to activate this underused plaza. There haven’t been problems with negative loitering or anything?
None. In fact, we don’t lock up the tables anymore. We’re showing a certain amount of intent, that we care about this place with the plantings and the way we are managing the place. We haven’t had any issues and we’d like to replicate this in other parts of the Loop.

That’s pretty great. You can just leave these chairs out all night and no one steals them.
Correct. Because we’re going on the assumption that people are basically good. And I think that’s a newer way of thinking about an urban environment. For fifty years, cities have been viewed as bad places. And now they’re terrific places, and placemaking is a way to articulate that and give people a place to enjoy the city.

There’s a school of thought with urban design that says you can’t make facilities too pleasant or else they’re misused. For example, there’s a lot of concern about making sure you’re not creating any surfaces that people could possibly sleep on.
Everybody’s really good at making a place. The trick is managing it. Here in The Gateway, every hour we come through and reset all of these movable tables and chairs, we wipe down the tabletops, and we remove all of the trash. So every time somebody comes here they’re like, “Wow, this thing’s set up for me.”

So what does the sculpture add to the space?
Obviously it’s a loop, which is helpful for our branding message. But it’s actually called “Give,” and if you push on the sides of that rather heavy loop, you can get it to move, and it gives. You’re transferring your energy to the piece of artwork, which in turn gives it back to you. People are really engaging with it. The first day we had it up someone sent us a video of somebody doing a dance inside of the piece of art, sort of a moonwalk.

What’s going on with Activate?
When the city rebuilt Couch Place, they made a huge investment there. It’s a sustainable alley so it’s designed with environmentally friendly materials, and we’re going to activate it. We’re going to use fashion, food and drink, sculptures, music and lighting to make it an interesting place. If it works, we’re hoping to add it to our monthly gallery crawl.

You guys have been having some street performers at The Gateway as well, right?
We have them on an occasional basis. Part of placemaking is surprise and discovery. And so, if people are having their lunch here and someone on stilts walks through, it’s memorable and excites the imagination. What would really be great with The Gateway would be if we could get some electricity. That’s something that we’d like to talk to CDOT about. We’d love to put twinkle lights in the bushes and trees, and at night this would be just a darling place to sit. It’s nice now, but that would make it charming.