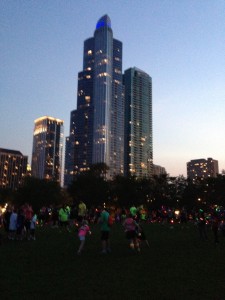 “Who’s going to Bar Louie after this and getting wasted?!?” demanded the race announcer before the Firefly Run last night. Yes. It’s that kind of run.

With a planned tour through eighteen cities across the country (last night’s race in Chicago was number five), the Firefly Run has expanded quite a bit from last year (when Chicago was also on the agenda). With runners grouped into two available distances (a rather sparsely attended 10K and a much more popular 5K), Arvey Field was blinkingly lit up before and after the running events as participants wearing bright colors, flashing lights (including arm/leg bands that were passed out as part of registration) and colorful costumes celebrated their planned (and then achieved) runs. A dance group on a large stage helped with the celebration.

There’s something inherently cool about running down familiar paths in unfamiliar circumstances. In this case, in the near-dark surrounded by hundreds of other runners wearing bright colors and flashing lights. There’s also something inherently dangerous about these specific circumstances: poor visibility and uneven sidewalks. Following sidewalks or the main body of the Lakeshore Trail provided plenty of space and light, helping the Firefly Run to succeed at being a solidly exciting glowlight experience, but the portion of the course between Museum Campus and the Chicago Yacht Club that butted up against Monroe Harbor was a bit of a challenge, both in navigating around late-night Segway tours on the open course and eyeing the cracked pavement for possible derailments.

Course: Running through Chicago at night is an impressive experience – even when you’re running on an open course on the Lakefront Trail. But the uneven ground at a few points put a bit of a damper on the excitement, as did the lack of visual stimulation, aside from other participants’ glowing costumes.

Organization (gear check, etc.): This is the first race I’ve been to that had absolutely no gear check. Sure, gear check would be more difficult to manage at night but for a run this size its absence was noticeable. The start and finish line were well-managed, as was night-of registration… but what to do with the race shirt retrieved moments before running?

Goodie Bag (includes shirt): A pair of arm (or leg) bands with flashing lights, a glow-in-the-dark wristband with “Firefly Run” emblazoned on it and a stylish grey running shirt.

Weather: A hot day gave way to a cool evening in the low seventies with light breezes making it even nicer. (Zach Freeman)