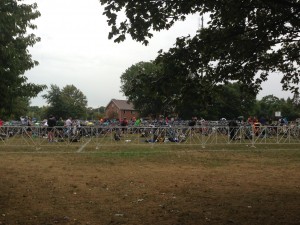 The triathlon is its own special animal—a hybrid that combines swimming, biking and running into one elaborate event. Mastery of one aspect of the sport does not necessarily translate into competence in the sport as a whole. That being said, this writer may be an experienced runner, but is a complete triathlon novice and this review should be read through that lens, as experienced triathletes may have different takeaways.

The first annual North Shore Triathlon by Precision Multisport started and finished in Gillson Park in Wilmette on Sunday morning. The weather wasn’t particularly cooperative, with a steady rain falling for most of the morning, but the sold-out field of 700 participants (584 finishers) didn’t seem particularly fazed by it, setting up their transition stations between five and six-thirty in the morning using a combination of pale dawn light and event lighting. Transition space was ample with bike racks clearly labeled by wave group.

Calm, warmer-than-anticipated water greeted triathletes for the 400 meter swim in Lake Michigan (a quick jaunt away from the shore and then a straight line) with plenty of buoys and emergency support in dinghies. Similarly, the twelve-mile bike ride (mostly on Sheridan Road) and the 5K (mostly along Greenleaf Avenue) were both well-marked with plenty of volunteers along the course. Both were out-and-back (with the bike course even including a double loop). Despite the rain, a number of spectators gathered along the course, particularly at the finish line and near the transition.

The flat course (including the calm lake) provided an ideal, (relatively) stress-free testing ground for first-timers and a chance for a PR for more experienced triathletes (though the multiple turns in the bike course may have slowed times a bit). Coordinators know what they’re doing and unless they raise the number of entries, this event will certainly sell out quickly next year based on solid word of mouth.

Course: Gillson Park provided a solid basecamp, getting athletes into transition quickly after the short swim in Lake Michigan. The out-and-back on both the biking and running courses provided less scenery, though that course set-up seems somewhat inevitable considering racers need to get back to transition, but the double-loop on the biking was a bit of a bummer. Plenty of support on all three.

Organization (gear check, etc.): Information was distributed early and often, making it easy for inexperienced triathletes to plan and coordinate before, during and after the race. Packet pickup at Precision Multisport in Evanston was a snap and on race day plenty of volunteers were around to offer information, assistance and support throughout the morning.

Weather: Mid-fifties and raining. Though the rain was less than ideal, the temperatures were perfect for all three legs of the race (especially since the lake water was warmer than anticipated). (Zach Freeman)