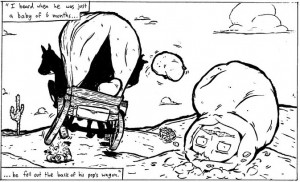 The Kickstarter Chronicles is a series of profiles of Chicago artists, writers, and musicians holding crowdfunding campaigns on Kickstarter.com. Kickstarter allows creatives and entrepreneurs to raise funds for their projects through small, rewards-based private donations. The third installment of Kickstarter Chronicles features independent comic book publisher Yeti Press, which is fundraising for its 2014 line of comics.

There is something both intimate and magical about reading a comic book. The smell of the paper stock, the heft of the ink, the idiosyncratic lines and color palettes of the illustrations—opening a comic book is like reaching into someone’s consciousness, and seeing what strange beauty you pull out.

That mystique and personality seem to inspire many of the comics produced by Yeti Press, the self-described “small publishing behemoth” that sprang from the 2011 collaboration between comic artists RJ Casey and Eric Roesner. Generally eschewing both the barrel-chested superheroes of classic comics and the dark, pulpy narratives of many graphic novels, Yeti’s comics tend to focus on the richness and texture of interior life, or the sublimity of the supernatural. From Kevin Budnik’s “diary comic” “Our Ever Improving Living Room” to the interconnected and continually morphing world of Erik Nebel’s “Well Come,” each of the comics that Yeti Press takes from pen to print render the layered worldview and personal concerns of its author-artists in lush detail.

This is not to say that Yeti does not know how to publish a more traditional comic book. “Pecos,” the one that began it all for RJ and Eric, is a hilarious and often grotesque spin on the tall tales of Pecos Bill—and Kat Leyh’s gorgeous graphic short story “Pancakes” actually does involve superheroes…though calling them barrel-chested may be a stretch. Yeti’s approach to creating and finding comics is simple: “We want to make comics that are fun to read,” says RJ. “Honest comics, a great story with great art, that’s it,” Eric adds. Ultimately, the key to Yeti’s early growth seems not to have been in publishing certain kinds of comics, but certain kinds of artists: ones with authenticity, intelligence, and a distinctive voice. In a world where art and narrative so deeply intertwine, that seems to be an excellent choice. 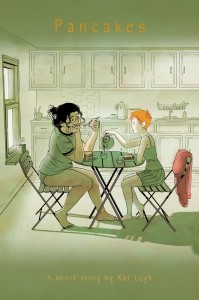 Fortunately for RJ and Eric, they have a slew of great artists to pull from right here in Chicago. “Most of [the artists] went to school with Eric at Columbia College,” RJ notes, with the one exception being Erik Nebel. “I think it’s in his contract he has to move to Chicago now, right?” his publisher jokes. RJ and Eric work closely with the artists to prepare their books for publishing, then contract out to local printers for the physical copies. “For some of our past books it didn’t end after the printer,” Eric continues. “Cutting and gluing belly bands, block-printing covers, making stamps and mustaches…we don’t mind putting in the extra love.” That love also includes attending comic-book conventions across the United States and Canada, and doing whatever they need to do to get their books into people’s hands. From a two-man operation just two years ago, Yeti Press has grown to encompass eight artists and fifteen comics, with more on the way. Its 2014 line will bring four new artists into the fold, and produce six comics ranging from a book of one-frame gag cartoons to the full-color story of a terminally ill man whose last wish is to ascend Mount Everest.

Printing all these books at the quality Yeti demands, however, costs money—for that, RJ and Eric have turned to Kickstarter. The crowdfunding site has proven to be an excellent vehicle for creative projects of this sort, and the two co-founders made some wise moves in crafting their campaign. Their video—a must for any good Kickstarter project—features the two of them tromping through the woods like Bigfoot himself, and their rewards follow a “presale model” that has been successful for many content producers in the past. Instead of offering abstract or peripheral goods (a shout-out, a souvenir) in exchange for financial support, Yeti offers copies of or subscriptions to its 2014 books as rewards for many donation tiers. This allows them to ensure that there will be a market for the books before printing them, establishes a connection between artist and audience, and gives potential supporters a much more concrete reason to donate. Goes the logic: “if you’re going to buy the book anyway, might as well do it on Kickstarter!”

Yeti’s campaign has been going well, and with nineteen days left RJ and Eric have raised over $9,000 of their $10,000 goal. The two have been shocked by the outpouring of support they have seen so far—“I guess we didn’t know quite how strong our following was!” RJ exults—but the work is not over yet. With Kickstarter’s all-or-nothing model, Yeti Press must reach $10,000 in order to see any of the money it has already raised. To top it off, Yeti has set a stretch goal of $12,000, which will allow them to print two more works by Kevin Budnik. “Every cent raised will be going into printing and shipping our releases,” Yeti’s Kickstarter page notes—that means the more cents, the more releases.