The brainy students of the University of Chicago often get so wrapped up in their grand ideas that they lose site of the beauty around them. I remember all the lectures and hours in the Reg blurring together during my time in U of C’s Master of Arts Program, but what I don’t remember blurring are the moments that I took to appreciate the beauty of the campus, especially since I’ve made a career out of loving architectural history through my tour company, Chicago Detours. Next time you want a little inspiration from your surroundings or simply a study break, think of this quick guide to the incredible architecture and artifacts of the U of C campus.

Let’s start with some history of U of C. The city of Chicago began to grow in prominence on the world stage in the late 1800s but lacked in the institution of higher education category. To rectify this problem, merchandising mogul Marshall Field—think “Field Museum”—donated land for a campus. John D. Rockefeller took the torch next and funded construction with the hope that Chicago’s new university would be the Baptist “Harvard” of the West. The University of Chicago was born.

Challenged with building a new university from the ground up to rival East Coast scholarship, primary architect Henry Ives Cobb chose the “Collegiate Gothic” architectural style to launch it into, at least, the aesthetic big leagues. All the stone, gargoyles and clay tile roofs mimic the architecture of historic European paragons like Oxford University. Ultimately, the style took to the medieval period in order to give itself a veneer that looked the part of those institutions that founded the classic roots of scholarship.

It is important to allow yourself the appreciation of the university’s architectural history during your short time there.  Push yourself to discover what most others will overlook. You will of course spend many hours in Harper Library reading room, which is practically holy in itself, but not many students have seen the other stately room that bridges into Haskell Hall on the third floor. Take the time to explore these intricacies. As you go up the stairs, note the unevenness of the stone and imagine how many other students before you have taken this route. Inside of Haskell Hall, home to the Department of Anthropology, you’ll find a totem pole in the stairwell. Of course Native American history has had a much longer story around here than anything else, but how often do you actually see a tangible sign of it? Hailing from the northwest, the totem pole is by no means local, nor is it necessarily an authentic symbol of Native American culture, but it is pretty cool to look at, especially if you peer up close and on the back side to see all the hatch marks. It’s the little things like this that are at your disposal while you earn one of our country’s greatest educations offered.

When you’re rushing through the Quad to duck through the Cobb Gate, a very minor detour to the right transports you to the watery world of Botany Pond. Among a lush environment of aquatic plants, bald cypress and flowering trees, you can walk over little islands that become nests for mallard ducks in the spring. You won’t have to look hard to find the “red-eared slider” turtles that have made the Quad their home.

Aside from the Quad, the Oriental Institute is just plain incredible. Here you can wander around ancient objects and colossal stone sculptures. The architecture of the building itself also must be noted. Check out the round lighting fixtures, ornate metal details, and Egyptian patterns painted on the beams of the ceiling. 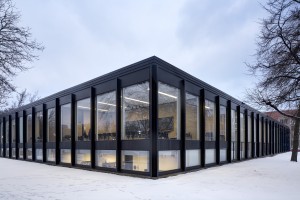 The School of Social Service Administration, just south of the Midway Plaisance, won’t be much of a visual Shangri-La in comparison to the other buildings on campus, but it’s a great place to philosophically ponder modern life as opposed to the more historic, ridged, dark designs of the Collegiate Gothic campus. Designed by Ludwig Mies Van der Rohe in 1965, its wide open space reflects Mies’ optimistic efforts to “bring nature, houses, and the human being to a higher unity.”

Washington Park, designed by the famous landscape architect Frederick Law Olmsted, could really use some more attention from students. Take advantage of it. Its lawns were once mowed by grazing sheep and sometimes you can even see people riding horses around the gigantic, historic green space which originally served Jackson Park via a waterway to the Midway for the 1893 World’s Columbian Exposition. The “Fountain of Time” sculpture by Lorado Taft literally bears the brunt of time since it isn’t currently working and hasn’t been for some time. The cast concrete figures loom ominously, making this your go-to if you want to ponder your post-U of C future.

Speaking of pondering, if you’re feeling down on being in Hyde Park instead of the bustling metropolis nine miles to the north, you can remind yourself of the beauty of the area by enjoying the view from the top balcony of the Logan Center for the Arts.