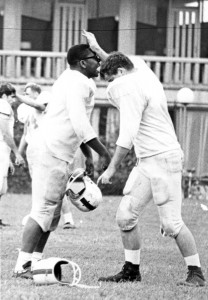 “Isn’t that where all the Reds are?” was a common reaction among my high-school classmates when I told them I was enrolling at the University of Chicago. Even in the sixties, what attracted me to Chicago was its abundance of libertarian scholars—led by Milton Friedman—and the prospect of a liberal arts education anchored by the Common Core. I originally fancied myself an economics major but later abandoned it for less-depressing American history. Mainly, I wanted to write.

The last thing I thought I would do at U of C was play football. But I found myself drawn to the purity it preserved in the sport, unlike the tainted and excessive adulation given by my high school, a national power running up a string of consecutive victories that would stand for a decade. What U of C had was a football club, a stew of undergraduates and grad students of diverse abilities.

U of C had been a power in the Big Ten (originally the Western Conference) under legendary Amos Alonzo Stagg, but ultimately its small undergraduate talent pool could not compete against Midwest behemoths. A last flash of greatness was back Jay Berwanger’s selection as the first Heisman winner in 1935. (I joined his Psi Upsilon fraternity, again an athletes’ sanctuary.) U of C left big-time football in its rear-view mirror in 1939. To some—especially President Robert M. Hutchins—it was good riddance.

The football club was the brainchild of athletic director Walter L. Hass, a former Carleton College coach hired by U of C in 1956 to rejuvenate its athletic department. But Hass was a football man, who patiently went about re-establishing the sport on a small-college basis, first creating an elective, noncredit “class” to fly it under critics’ radar. The club survived a “Ban the Ball” sit-in at a 1963 game, not to mention later political activism including a 1969 sit-in resulting in student expulsions. 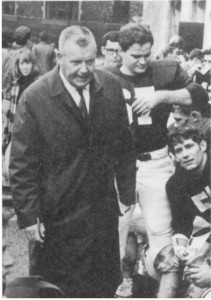 Arriving as a freshman, I witnessed the club practicing between the fieldhouse and my Pierce Tower dormitory. It was so pure and simple—grad students and undergraduates playing for the love of the sport, no hierarchy, no scholarships, no letters. Fortunately I had already heard the now-classic spoof “Football Comes to the University of Chicago” (http://www.youtube.com/watch?v=xd_-1Zlo2hM) by then-youthful Severn Darden, Alan Arkin et al.(The Compass Players/Second City gang), and was not insulted that when I reported to Coach Hass I was 190, he assumed it was my weight not my I.Q.

I was strong from weightlifting and work but no footballer; some undergrads were athletes who competed in other sports. An early practice was typical in its way: We linemen were learning to cover punt returns, when the punter boomed the ball. The receiver signaled a fair catch as a powerful varsity wrestler bore down on him, knocking the stuffing out of him. Coach Hass quietly shuffled down the field, patiently explaining to the still-beaming tackler, “Jim, we have something called the ‘fair catch rule’…”

Assistant coach Chet McGraw (also from Carleton) had a curious dysfunction about players’ names and formations he was teaching, but he knew the game, so when he warned me that an opposing team’s bread-and-butter run was a second-man-through play, as a defensive guard I rehearsed it in my sleep. Sure enough, I stopped it cold. Instead of spending the rest of the game on my back, I ranged with abandon, assisting on some wide plays and enjoying the rush that is the pure pleasure of sport.

To the amusement of some of us and the bemusement of others, fully fashioned cheerleaders started showing up for games. One cheer would have delighted Arkin and compadres: “Themistocles, Thucydides, / Peloponnesian War, / X squared, Y squared, / H2SO4. / Who for? What for? / Who we gonna yell for? / Go, Maroons!”

Experienced grad students made for a distinctive chemistry. We were so beaten up one season we could not field two full strings against Lake Forest’s seemingly limitless fresh jerseys, so warriors like tackles Howie Miller (Brown University) and Lowell Callahan (Mount Union) played both ways. A beautifully executed bootleg pass for a touchdown was heartbreakingly called back because our quarterback also fooled the ref, who blew the ball dead.

I found myself head up on their lineman Wilson, who outweighed me by seventy pounds, so Miller helped out, until words and punches were passing between them. At the end of play, our exhausted Miller lumbered to the bench, while out of eyeshot came Wilson, swinging his helmet. Callahan, only 200 pounds, tackled him, smashing him in the nose until blood flowed. Afterward, a reporter asked Lowell if it was true he was a divinity student; he said he was. “Is that any way for a divinity student to act?” asked the reporter. Lowell replied that he thought the S.O.B. needed a lesson in “righteous indignation.”

Thanks to a petition drive by teammate Gary Leland and others, the University trustees approved small-college, Division III status for football. In Fall 1969 it became a varsity sport, with some fresh undergraduate faces joining stars like Wooddell, McGree, Yovovich, Lockhart… My own career ended in fall 1970, hobbled all season by an injury that still dogs me—but, no regrets. 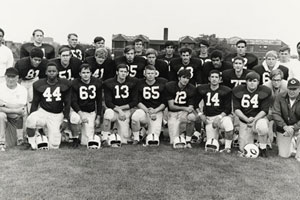 Coach Hass retired after the 1975 season. Subsequent coaches with more players and earlier schedules to counteract U of C’s October opening enjoyed greater success. Not long ago I provided Jeff Rasley ’75 with some anecdotes for his historical novel “Monsters of the Midway: The Death, Resurrection, and Redemption of Chicago Football.” Afterward, Jeff mentioned an assessment that the 1969 team was the “worst in college football.”

Yet, from 1967-1970, the Maroons won two games each year, while Jeff played on squads that were 1-15 in two seasons. I assured him that while HE may have played for the worst college team, WE most assuredly had not. Then again there is the newspaperman’s dictum in a classic John Ford Western: “When legend becomes fact, print the legend.”

Football players of the Walter Hass era will be acknowledged at the Maroon homecoming game vs. Macalester College, 1:30pm, Saturday, October 19. Alumni tailgate party to be held from 11am-3:30pm.