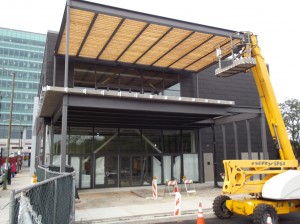 The seemingly endless construction on 53rd Street is finally showing signs of completion and, before the year is out, Bruce Finkelman and Craig Golden, who between them are partners in some of the city’s most acclaimed venues, from Finkelman’s Longman & Eagle and The Empty Bottle to Golden’s Evanston SPACE, will have the doors to their newest project open. A two-story restaurant, bar and music venue combo in the works for almost two years, The Promontory will introduce more than a little North Side flair to Hyde Park.

Come December, patrons will be able to enjoy a modern hearth-style menu coupled with an artisanal drink selection, all the while having immediate access to a stage that will host a combination of local musicians and the indie/alternative tenor one expects to hear at The Empty Bottle. “I have a feeling it will be an honest reflection of the things we like to do,” says Finkelman. “Both from a musical and resto standpoint.”

Last Thursday, Finkelman met with Alderman Leslie Hairston to discuss The Promontory agenda and what it will mean for Hyde Park. “Music and food work harmoniously and [Hairston] is looking forward to what we’ll be bringing to the area,” says Finkelman. “It’s similar to why we are doing a project in Pilsen. It’s about the community. We are huge fans of Hyde Park.” Finkelman expects the milieu of his other joints to effect and be affected by the creative blend of culture in Hyde Park.

The Promontory construction is underway at 1539 East 53rd, the building currently home to the Chicago-based clothing outfitters Akira, and CorePower Yoga. The venue was originally expected to open in early 2013 but unspecified delays set the opening back to this December. According to The Promontory blog, the interior design will include decorations stripped from what was left of the original lobby of the famous Piccadilly Theater built in 1927, which closed in 1963 and now serves as graduate student housing. Finkelman’s design team was granted special access to the Piccadilly’s still-standing lobby in order to repurpose the historical landmark’s antique architectural fixtures and keep them at home in Hyde Park.

The flair that Finkelman and Co. harnessed at Longman & Eagle in regard to beer, cocktails and spirits will be a vanguard affair in Hyde Park if carried over to The Promontory. Let’s hope that the rich whiskey selections made to blend, the craft beer list and small-batch wines at near-dive prices will continue here on the South Side. Daily $3 shots of select craft spirits deserve a strong welcoming. Especially when the food at your disposal will be coming from the talents of award-winning chef Jared Wentworth and your favorite band is heard through the floorboards above your head. (Charlie Puckett, MA ’13)