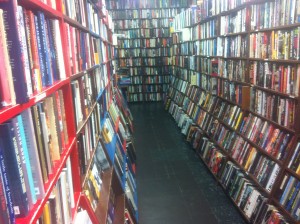 At first, I felt like an outcast. I lived against my will in quaint, pastoral places, and screamed about things which no one near me understood. I saw the city as my escape. At first, I merely wanted to belong to Chicago, to belong to it at all.

But once I did, once I’d been paying too much rent and squeezing through the Blue Line for some months, jittery with my sense of inclusion, I grew to want something more. I wanted for my leanings—my preferences for the written, for the expressed, for the over-thought and the intellectually overwrought—to flow freely. For my bibliophilia and existential self-pummeling to be worth something; for them to find a home. I’d long assumed the city was pure fertilizer for the madness I’d always felt, that it was a place for my socio-political yowling to take root, to bloom. This, I thought, was where the alienation I felt through all my suburban life, through all my years in the Big Ten, would be assuaged.

But it wasn’t. I was too surrounded by those merely feigning to feel what I felt. They’d only scheme tragic visions with me until they found a beer, a joint, the correctly musty bar, or the sound of a song that was properly sold to them—at which point they were as opiated as anyone, and closed themselves to the continued crocheting of our dystopian, perversely celestial quilt of the world. I would have to stay up sculpting it myself in Microsoft Word, through any number of failed novels. I would have to fall asleep with my shoes and sweatshirt on, with all of the lights on, with my fingers on the keyboard.

Then I took myself and my gnawing dissatisfaction with urbanity, as I knew it, to Hyde Park, one day. Everything about its landscape, sparsely tracked-upon by its mostly buried denizens—trapping themselves into so many book-jammed closets—felt hardened by over-thinking. I was thrilled. I walked into Powell’s Bookstore, and my eyes became planets as they feasted upon so many works of fiction that I’d only ever heard of, before—that I’d never seen on a shelf, and never thought that I would. I shoveled Thomas Bernhard, Robert Walser, Elfriede Jelinek, Herta Muller, and Laszlo Krasznahorkai into my arms. At the register, I filled out the application to work there. 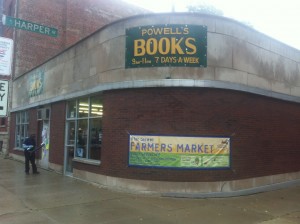 When Powell’s called a month later, it came as no surprise; I’d been reading all of those books, written by my strange new European friends, cursing so much into the void. I was letting their worldviews take me into their arms, and the universe seemed to be only biding its time, before it brought me back to the place where I’d found them.

Few things have made me more cozy in my skin than meeting all of the maniacs who ran through that store. I would skittishly race through paragraphs on my laptop, on my hour-plus commute, and feel proofed against the judging glares of my fellow commuters. Because I knew, once I walked back through those store’s doors, that I’d be shaking the hands of men and women filling boxes with the books that they also thought contained the keys, the keys to completing their tomes that would make them published, too—that would make them inexorably part of the world, too.

Their monomania was inspirational. I began to stack more, and more, and more novels onto my shelf in the store’s back chambers. I became steeped in traditions of thinking and feeling and speaking which made more sense to me than anything yet had. I began to see with sharper sight, daily, the thread I needed to shoot through the literature of my love, to make my yowling more heard.

And though I eventually quit working at the store, I never left the earth it helped bury me into. I never forgot how it showed me the void, the void of humanity I’ve most ever belonged to, and made me part of its colorful chorus.