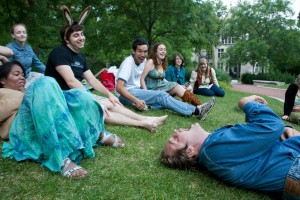 I graduated from the College of the University of Chicago in June 2012, and I started my job at the University of Chicago one week later. I joined the Alumni Relations and Development (ARD) staff at one of the university’s “schools and units”—which is to say, one of the smaller, independent organizations under the umbrella of the university. In plain language, that means I’m a fundraiser, but not the kind of fundraiser who calls up my fellow alumni to ask for donations.

While I haven’t taken a class in more than a year, my time with the university as an employee has still been educational, as I’ve experienced the vast perspective shift between undergraduates and the rest of the community. That shift was evident immediately: not so removed from my O-Week, I went to new-employee orientation for a long, antiseptic treatment of the school’s history, and I sipped their coffee and waited to hear something new. I didn’t. It was only interesting to see them leave out the unsavory bits of history and how they explained the “quirky student body” to employees who didn’t know Hyde Park.

They need the explanation, because I think it can be hard for employees to see past the stereotype of the socially crippled university student. The undergraduates who attract attention fit the stereotype, as they don’t blend in. Employees are forced to notice That Kid, not the rest of the class.

I was aware of this a little while I was an intern at the same place, but it took becoming a full-time employee for my coworkers to feel comfortable complaining about UChicago students to me. Sometimes those students were other former interns, often personal friends. Sometimes it was the student body generally. It was surprising to me that they’d forget I was connected to these people, though I guess it was a compliment that I didn’t seem “UChicago” in the workplace.

It took a while before I could listen to my coworkers complain about the students on the 55 or in the cafe and not take it personally. I felt compelled to explain them, though the specifically UChicago world doesn’t translate well. I learned to let it go, but it’s still sometimes disorienting to be in a place where I’m alternately expected to see it from the outside or to justify the culture on behalf of the school. I can do neither effectively. Instead, I try to be an ambassador of sorts. I’ve spent a year trying to convince my coworkers that the Woodlawn Tap is actually called Jimmy’s. I’ve explained that the weird stuffed bird for sale at the bookstore is a phoenix. I’ve taken them to see the ducklings in Botany Pond. It’s the details that made Hyde Park home.

ARD understands that a little better because they need to understand alumni. In one full-staff meeting, scholarship recipients were brought in to talk about how wonderful their experience was at UChicago. The representative of the College was exactly who you’d expect. He was an econ major, or maybe political science. He did Student Government and another club or two focused on social issues. He’d completed internships through the career office. He was articulate and only slightly UChicago awkward.

As a fundraiser, seeing what your work makes possible is extremely rewarding, and I appreciated what ARD was trying to do. But I found it something of a loss that several hundred staff members weren’t seeing UChicago. That student is not what makes UChicago interesting (no offense to him). That student goes to any college. The students who make UChicago the place it is are the math majors who spend all of their free time doing theater; the econ major who doubles in English because she loves Victorian literature; the pre-med who spends all of her free time baking; the serious fourth year who defecates in his pants in the name of Scav Hunt. There’s a depth and breadth to the best sort of UChicago student that is hard to define and hard to find beyond the school.

So to the students who are starting at UChicago in the fall, the little I have learned from four years as a student and one year as an employee: take advantage of the community. Take advantage of the fact that everybody knows about the Polar Bear Run and Scav and Smith and Marx and Core Bio. After UChicago, you’ll rarely be anywhere you don’t have to explain yourself.