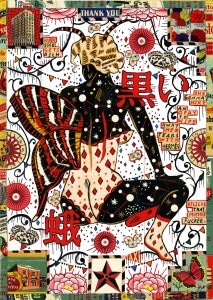 I have to laugh when I hear the code words the Tea Party brain trust bandies about. “Loud Tribesman” was Newt  Gingrich’s euphemism for the “what-can-we-say-besides-n-word” code that identifies this large, scary and vocal American street gang. It is what they are. They come to our President’s speeches strapped. They engage in a just-above-the-white-linen-and-hood rhetoric that aims to point out at every juncture that Barack Obama is black, and they “got” theirs. The huge, angry, and incredibly entitled white middle class is their target. In fact, I’m their target audience.

Among other white guys, I do notice a more disheartening and cavalier use of the n-word. When I point out it isn’t acceptable, the conversation halts and I get the hurt look of betrayal back in exchange. It is a careful meter of “us and them.” There is this feeling out there in white America that people of color have reached the promised land; that all of the inequities of 400 years of pigment-based subjugation and oppression have suddenly gone away. Such are the petty delusions of the Tea Party folk. Oh that, and the idea that they are the only ones in America paying too much in income tax. Welcome to the big world, whitey. They didn’t seem to mind taking this fucking when George W. Bush was creating the biggest deficit in the history of the Republic.

My favorite playwright right now is probably one you’ve not heard of unless you live in Chicago. J. Nicole Brooks was born on Chicago’s West Side and grew up tough with a single mom on the South Side. Besides plays, she writes a withering blog called “Close Captioning for the Jive Impaired.” In it she skewers white racists, black racists, rappers, the vain, the rich and the richly deserving–there is nothing PC or out of range for her bitterly funny barbs. It is a destination blog. Her plays include “Fedra,” produced by Lookingglass Theatre in 2009 to lavish and ecstatic reviews, and my favorite, “Black Diamond: The Years the Locusts Have Eaten,” which chronicles the rise of Liberia’s first woman president, who was catapulted into power, in part, by a guerrilla brigade of women who dressed like Foxy Brown and Coffy and other blaxploitation heroines they’d seen on videos. It is a nutty, subversive and uplifting work of art which also garnered rave reviews. Her plays are dangerous and they challenge the myth-making of both blacks and whites. Nobody gets off easily. Nikki is that nuanced idealist who locates the bad in the good and the good in the bad; forever the moth dancing with fire.

I first met Nikki acting in a production of Studs Terkel’s “Race” at Lookingglass Theatre in 2003. All of us from this cast became close friends and have pretty much kept in touch. What I admired about Nikki Brooks was her absolute refusal to let anything in life or theater defeat her. After “Race” she did the requisite move to Los Angeles to better her career choices as an actor and a playwright, only to find precious few roles for women of color that were not demeaning. Now in her mid-thirties, she is fully aware that she will play and write different parts that come with age. She can handle it.

Some years ago, an asshole tried to carjack Nikki and she got away with her keys and ran into a construction site.  The goof followed her there and Nikki found a piece of rebar pipe and tuned this dipshit up but good, all the while screaming for help. When the construction workers finally arrived to her aid, she asked them what the hell took them so long. The hardhat replied, “Girl, you were doin’ jus’ fine without us.” The goof who tried to carjack her required an ambulance and Nikki returned to her car. From what I understand he never again messed with the favorite daughter of Vera Brooks.