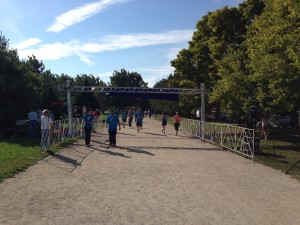 Breakdown: Chicago is home to an impressive (and ever-growing) number of races. From 5Ks to marathons and beyond, there’s typically at least one race happening in the city on any given weekend day. This is a huge plus for Chicago runners. And it’s typically helpful to race coordinators as well, since they can rely on a core group of runners always in the market for a run. But this Saturday morning the popularity of running put a damper on two separate runs happening at the same time.

Starting at 9am, the second annual Friends of the Poor 5K Run/Walk (coordinated by the Society of St. Vincent de Paul Chicago and DePaul University) kicked off across the street from the Peggy Notebaert Nature Museum. At the same time, less than a mile south in Lincoln Park, the MMRF Race for Research 5K Walk/Run also started. And while neither race was huge (Friends of the Poor had around 120 runners while MMRF had around 600), flaws in the Chicago Park District permit-application process were witnessed firsthand by members of both races as the two courses directly overlapped (with both courses passing through each other’s start/finish lines).

As neither race was particularly competitive (both races are run by charities) much of the hassle of crossing courses and running against traffic was overlooked by racers and coordinators alike (though many apologies were offered). As this is the second annual running for the Friends of the Poor 5K Run/Walk in Chicago and coordinators are still looking to attract a base, the weather was a plus but a crowded trail was not. Having a closed course—or at least not overlapping with another race—would greatly increase their appeal. Still, for such a small race, the volunteers showed up with smiles and a pre-race yoga instructor led almost the entire field in a quick ten-minute warm up.

Price: $35
Course: Friends of the Poor followed an open course in front of Peggy Notebaert Nature Museum and headed north, turning around and heading south just before passing under Lake Shore Drive. Heading south to South Pond in Lincoln Park is where the course collided with (and passed through) the MMRF course, complicating things for runners of both races for a stretch.
Organization (gear check, etc.): Packet pickup at New Balance Chicago was low-key and friendly, race-day registration and packet pickup were equally hassle-free. Base camp was small but neatly organized. Race directors found out about the MMRF conflict the morning of the race and only hinted at the overlap in pre-race announcements. It’s a small race and gear check was appropriately speedy.
Goodie Bag (includes shirt): Stylish t-shirt design, though it’s just a white cotton t-shirt.
Weather: Low sixties and sunny made for a beautiful day to run—a big improvement over last year’s race weather. (Zach Freeman)