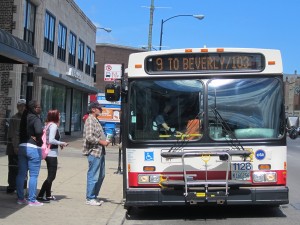 “It doesn’t matter what you do to the bus! I will never take a bus! I will drive until the state won’t give me a license anymore.” So said an otherwise nice-seeming lady from the anti-bus rapid transit group the Ashland-Western Coalition at a community meeting this summer.

The CTA plans to build a BRT line on Ashland from 95th to Irving Park, providing an El-train-like experience on wheels instead of rails. Think of it as the Gray or Indigo Line. The buses will run in car-free lanes in the middle of the street, with stops located every half mile.

These traits, along with several other timesaving features, will bring speeds up to an estimated 15.9 mph, including stops, during rush hours. That’s almost twice as fast as the current #9 Ashland bus, which the CTA says averages only 8.7 mph, and it’s comparable to car speeds. That’s what’s needed if we want to make transit an attractive alternative to driving.

However, some residents and business owners are freaking out about the city’s plan to convert two of the four car lanes on Ashland to bus lanes and eliminate most left turns. The Ashland-Western Coalition, led by Roger Romanelli, is spearheading the opposition. They annoy me because they claim to be a pro-transit organization but, as that lady’s comments indicate, some members of the AWC really don’t care how fast the Ashland bus runs because they would never ride it.

They might feel differently if they were among the tens of thousands of Chicagoans who depend on the #9 every day to get to work, school and medical appointments. To get a better sense of the current service, on Wednesday of last week, I rode the entire sixteen-mile future BRT route during the evening rush. Here’s how my epic transit trip went down:

4:40pm I board a nearly empty bus in front of Hassy African Hair Braiding & Weaving at Ashland and 95th in Brainerd. Traffic is flowing freely in both directions. After a slight delay by a Metra train at 89th, we pass a Kingdom Hall of Jehovah’s Witness at 85th.

4:52pm By 83rd there are twenty passengers, and everyone but me is African-American. “Wheelchair coming on,” the driver announces, and people clear a space while the bus kneels to allow a senior to roll aboard. This process that takes a minute or two, time that would be saved on by BRT, which will feature bus-level boarding platforms.

5:04pm We catch up with fellow Ashland bus #1122 at 66th. Up the block at 63rd and Ashland, several passengers leave to board the Red Line, which has been rerouted to this station during the five-month track rehab. I notice a woman of short stature, not much more than three-feet-tall, departing with her young son in a stroller.

5:17pm At Garfield we leapfrog the other bus again. The car-free BRT lanes will allow the buses to keep consistent schedules, eliminating the bus-bunching problem. We’re in Back of the Yards now and Spanish signs start appearing. The first of many Latino passengers, a mom with her son and daughter, board at 50th.

5:24pm After we pass an arch by the Stockyards Industrial Park at 43rd, a drunk older man, with a white substance smeared across his face, illegally boards via the rear doors. “Hey you, you can step off my bus!” the driver shouts. As the man slinks back out, I notice he’s carrying a shopping bag containing a half-eaten birthday cake.

5:38pm We’ve been traveling in moderate traffic for the last few blocks as we approach the Stevenson Expressway and an Orange Line stop. Next we cross over the South Branch of the Chicago River, where we get a fine view of the skyline, as well as college students rowing crew below us.

5:48pm After we pass by the attractive campus of Benito Juarez Community Academy at Cermak, featuring statues of key figures from Mexican history, a group of slender, animated teenage boys board. One of them is wearing a sleeping mask around his forehead with a pair of closed eyes printed on it.

6:00pm Having rolled past the Illinois Medical District, an official supporter of the BRT plan, the Ike, and the Teamster City union hall, by Madison we’re firmly lodged in northbound traffic, and right behind our old friend #1122. We continue north into Noble Square, and by Chicago Avenue the passengers are an even mix of blacks, Latinos and whites.

6:11pm Just south of Division the bus passes by the three neighboring burrito joints, all called La Pasadita. The southernmost one is beloved for its black salsa, made of charred jalapenos. At Cortland, a man panhandles with a placard that reads, “Here to survive, not lie and get high.”

6:22pm It takes us several light cycles to get through the convoluted intersection of Ashland, Armitage and Elston. At Webster we pass by Dolphin dance club and cross the North Branch of the river, then come to another clogged intersection at Ashland, Fullerton, and Clybourn. I’m feeling a little nauseous from all the stop-and-go traffic.

6:30pm By the time we get to Wellington in West Lakeview, the passenger demographic has transformed from nearly all African-Americans to almost completely Caucasian, a reminder of our city’s stark North Side / South Side divide. Traffic is bumper-to-bumper.

6:40pm When we finally arrive at Irving Park and Ashland, a stone’s throw from the notorious Diner Grill greasy spoon, I’m thoroughly sick of sitting in heavy traffic. It’s exactly two hours since I boarded, so we’ve been crawling along at a pathetic average of 8 mph, even slower than the CTA’s 8.7 mph estimate. It’s clear that Ashland riders deserve better, and fast, reliable BRT service can’t come soon enough.

Ashland bus riders: How do you like your ride? Please share your own story with the Active Transportation Alliance! http://www.surveymonkey.com/s/SH5TMNB