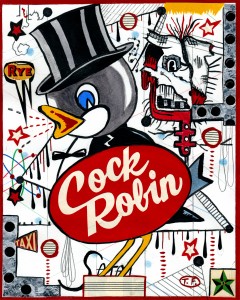 All the birds of the air
fell a-sighing and a-sobbing,
when they heard the bell toll
for poor Cock Robin.
– English Rhyme

The name Cock Robin has its origin in this morose little poem written around 1744, for children. Leave it to the English to imbue a perfectly lovely bird with a truly horrid fate. A million laughs in “Jolly Olde.”

The Cock Robin I am familiar with was the name of a chain of hamburger and ice cream fast-food joints that were all over the western suburbs when I was growing up. The two I remember the best were in Lombard and Villa Park.

As a kid, I preferred their burgers to McDonald’s or Burger King, which is not to say that they were good; they were gut-bombs of the rankest order. When you are a kid though, they seem to taste good because you are a walking garbage disposal with a monster metabolism. Today? I wouldn’t eat one. They were kind of like bigger versions of sliders–the kind of burger you should just take home and throw in the toilet. Me and my brother got a huge charge out of the fact that a restaurant had the word “cock” in it and, like every other eleven-year-old, we’d look for excuses to say it in front of teachers, especially nuns.

“Excuse me Sister, can we go to CAAAHHHHHCCCKKKK Robin for lunch?” They’d go mental. They knew we were getting over on them, but they didn’t know quite what to do about it. “This is great, Sister. My mom brought me lunch from CCCAAAAHHHHCCCCKKKK Robin.”

The thing that was special about Cock Robin was the ice cream. They served it in squares instead of scoops and it was good. They had a sherbet rainbow cone that was magical. Between the square shapes and the colors, these were a treat. They were also really good.

Every week, the Villa Park Argus or the Lombard Spectator would have a coupon for their “Big Buy,” a double cheeseburger–buy one, get one for a penny. Me and my pothead friends would raid the papers at the drugstore and Al’s Smoke Shop for all of the coupons and have a stoner feast on winter afternoons. The ones we didn’t eat, we threw at cars. Our crowning achievement being that we once nailed a squad car with five Big Buys. This victory was somewhat dimmed by the vendetta the local cops carried out against us for years after. The Villa Park cops were pricks and once they knew your name, they would go WAY out of their way to fuck up your day at every opportunity.

One of my first crushes worked at the Lombard Cock Robin and she was always surrounded by a posse of greaser shit-heads who didn’t much like me and my crowd. They were a collection of monosyllabic ass-wipes who could often be seen with a string of drool connecting their lower lip to a milkshake.

There were also some cool rockabilly guys who hung there, who were distinctly different than the Greasers. These guys were cool. They liked Elvis and Carl Perkins and the nascent rockabilly acts like Robert Gordon. One of the guys was Erik, who later fronted Hi-Fi and the Road Burners. These guys were good guys who loved motorcycles and rock ‘n’ roll. A couple of years ago, Erik died in a motorcycle accident, which made me sad. I can remember talking to him back then and both of us agreeing that nothing would happen for us until we got the hell out of that town.

The girl who worked at Cock Robin’s name was Susan and I never knew how to talk to her, so I would just sit in there and draw and chill out and smoke cigarettes. Once in a while she’d ask me what I was up to and tell me her boyfriend was stupid but had a good job as a mechanic. I mostly just listened and made little sketches of her. I felt like she was out of my league and her boyfriend was a shaved ape who could kick the shit out of me if he had a mind to. Eventually he got her pregnant and abandoned her. She raised that kid all by herself and never bowed her head or felt ashamed despite the disapproving glances she’d get at the Jewel or the mall. I always thought she was heroic.

The Cock Robin isn’t there anymore… replaced by something faceless and invisible in a way that just happens in plain sight, if that makes any sense. I killed a lot of time there. I learned some lessons about how people go on through life doing their best with what they have, and how when things are tough, a square cube of sherbet can seem like a revelation, while you’re waiting for your shift to end.

I have so much respect for Tony Fitzpatrick. The guy is not ONLY a great graphic artist, but he can ALSO write a brief story about a fading memory of a much-beloved fast food joint from his youth and SOMEHOW imbue the story with BOTH pathos and a positive outlook about humanity.