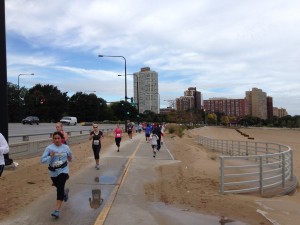 While there are a large number of races taking place in Chicago throughout the year in various northern sections of the city (Lincoln Park, Montrose Harbor and Grant Park come to mind) aside from the two popular halfs (Chicago Half Marathon and the Chicago 13.1 Marathon), there aren’t a lot of racing opportunities south of Museum Campus. The rather lengthily titled University of Chicago Medicine Comer Children’s Hospital RBC Race for the Kids 5K Run, starting and finishing on the University of Chicago campus, provides just such an opportunity. And though it might be a hike for non-South Siders to get to, it’s worth the trip.

With a reported 1,701 participants registered this year (and around half opting for chip-timing), the University of Chicago quad (at 58th Street between University and Ellis) was packed with runners before the race. Setting up base camp in the midst of the impressively historic academic buildings in this location provided an air of illustriousness to the proceedings and a clear boundary for the vendor tents.

Construction recently began on University Avenue, resulting in a bit of a rough start on the initial turn onto the race course (race announcers warned of this beforehand), but once runners turned onto 57th Street and headed for the Lakefront Trail (passing Powell’s Bookstore and the Museum of Science and Industry, among other notable locations) the course was smooth and plenty wide, with cones and volunteers marking each twist and turn. Finishing by turning back into the quad by passing through the massive gate at 57th Street added a nice touch.

Course: Most Chicagoans don’t get too many chances to run around Hyde Park. This course, starting and finishing at the University of Chicago quad (at 58th and University) incorporated parts of the Lakefront Trail, a run past the restaurants and stores of 57th Street and a nice dash past the Museum of Science and Industry, making it worth the trip to the South Side.

Organization (gear check, etc.): A few different packet pickups in different locations provided opportunities for pre-race pickups but day-of pickup was easy and quick (as was gear check). Coordination before the race was clearly communicated and well-structured and the course itself was well-marked.

Goodie Bag (includes shirt): A long-sleeve blue cotton t-shirt, a stylish light blue gear check bag and a frisbee with the major food groups on it.

Weather: Mid-fifties with a light rain that cleared up before race time. (Zach Freeman)