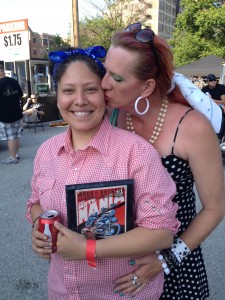 Tucked away in a Ukrainian Village alley off of Bishop Street, there are two women in a garage full of horsepower attracting askance glances and stares of jealousy alike. If you are a Ukrainian Villager, chances are you’ve never seen the garage or met Kamaca Reavis and Crystal Kimmey, but you’ve probably heard the engines of their vintage vehicles splitting apart a quiet afternoon, or you’ve heard a friend say, “I saw the craziest thing today walking down Chicago Avenue.” The spectacle your friend’s talking about could have been Reavis and Kimmey and their eight-year-old son idling in one of their vintage BMW sidecar motorcycles at a stoplight.

If your friend was staring, and Kimmey saw it, she may have said this to her son: “Seamus, sweetie, ask that nice man if he doesn’t like the color of my dress or if he’s constipated.” When that eight-year-old kid in a Star Wars X-Wing helmet leaned over in the sidecar to ask the question, that’s the moment your friend probably had his constipation relieved and whispered desperate supplications for the light to turn green. That’s just the kind of neutral response Kimmey is used to throwing out there before she shifts into first and rips away. 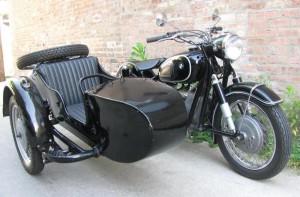 If you do happen to walk down the alley to their garage, a homey, century old brick-walled hovel, you’re likely to find Reavis sitting cross-legged in a rusty barber chair with a warm grin behind a cigarette. She’ll happily initiate a conversation before you take your eyes off what you’re gawking at: two of the only three vintage early 1960s BMW motorcycles in Chicago—their ’60 and ’62 BMW R60/2, both with original bullet sidecars. She’ll explain that next to those is her 1960 Austin Mini Cooper S and something the Crypt Keeper would drive to church: a gnarled, matte black 1930 Plymouth Rat Rod Roadster, affectionately called “Snake Oil,” equipped with a Chevy 350 engine, 275/70/17 (metric for “I-don’t-fuck-around”) rear, off-road tires and a woven picnic basket in the backseat for leisurely family adventures. If it’s a day where Reavis particularly misses her home before Chicago—Shawnee, Oklahoma—there may even be a set of antlers attached to the roof for an outland effect. Then it’s on you to make your mouth say words and respond.

Reavis, a Native American and descendant of the Ponca tribe, moved to Chicago in 2011 to be with her partner, Kimmey, the other half of this female force adding all kinds of wrenches to the male-dominated motor culture. There is little about either of these women that doesn’t warrant amazement or stop short of fascinating. Kimmey is a retired bull rider who has the medical records, trophies and firm grip (with lime-green polished nails) to prove it. She’s currently a land-lady-lord in Ukrainian Village whose handywoman skills come from previous work as an alternative energy technician for wind turbines and solar panel farms here in the Midwest. Together, they are a dynamism who love sharing their passion for vintage projects with enthusiasts and strangers alike, especially other women. Because for these two women, upsetting the hobby’s gender norm and being the anomaly starts with a fearlessness to just ask questions, the skills a byproduct of the answers. 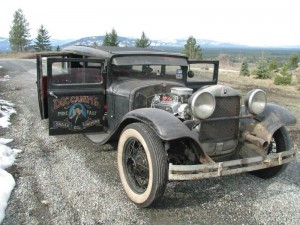 “My Pops taught me how to work on cars at a young age,” says Reavis when asked how her interest in the hobby originated. “At first it was simple things: oil changes, starter-ignition switches, making sure all the fluids are filled, then later welding and actual engine mods and/or upgrades. I think that Okie (“Oklahoma”) women are sometimes an anomaly in and of itself because most women were taught to hunt, fish, change the oil and tires on their cars or trucks. We haul hay, bait our own hooks, and we’re taught the value of working hard. I work hard reading manuals, asking friends to help, watching videos on the Internet, and tons of trial and error. I feel accepted in a male-dominated field because I’m not afraid to ask questions and to get my hands dirty. I would’ve never learned to work on cars if it hadn’t been for my Pops’ patience on answering all of my questions at a young age.”

For Kimmey, her interest in the auto world became a passion through her relationship with Reavis. “I love watching her work and figure stuff out and her excitement at fixing a problem can be so fun. I’ve always been fascinated by cars and wanted a motorcycle and when she brought home our ’62 BMW I decided it was time I learn. Being a newb is difficult but so fun at the same time. I also think it brings us closer together.”

That fatherly tutelage and Kimmey’s glowing heart have made them into a duo whose ’62 BMW won “Best Vintage German Motorcycle” at Chicago’s 2013 Mods vs. Rockers Show. Even without that bragging right, they’ve had very little trouble fitting in with the stereotypical mix of the auto scene’s beards and bruisers. “If you got the chops and can pull up in a ’62 BMW and not act like an a-hole and actually have a little grease under your nails, you’re one of them,” says Kimmey. “We both have waffle burns on our calves and grease under our nails. We can talk the language and understand it and work on our vehicles so that usually gets us in the door after they figure out we’re not posers.”

Their rare toys give them a new story every time they start the ignition and for them that’s half the fun of being a part of the culture. “When I drove the Mini home to Chicago I received the thumbs-up from a Lamborghini and an Aston Martin. I raced a souped-up BMW and won and was pulled over by a police officer who witnessed the race. He just wanted to talk about the engines mods that I had on the car.”