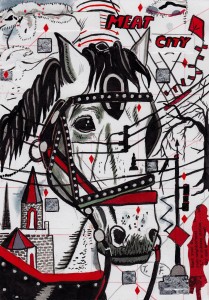 There were no horses on the American continent until about the 1680s or so. The Spaniards brought them and in no time they became one of the most ubiquitous animals in the new world. As went the American experiment, so went horses. As a beast of labor, transportation and food source when things got lean, the horse has served us well.

For years they were slaughtered for dog food and sundry other industrial uses as well—brushes, hides and various gluing compounds. It seems that there is no bottom to the ugly cruelties we can levy on the equine species.

The history of our own city is also rich with the labor of horses. In the stockyards, horses rounded up cattle and drove them into pens, and to the slaughterhouse. Horses helped build bridges and roads as well as canals.

Our city’s first police force, enforced the law from horseback—and in many cases, to this day, still do. Just watch on those rare occasions when one of our sports teams wins a championship. The corner of Clark and Division has more horses and cops than a John Wayne movie.

Downtown, horse-drawn carriages do a bumper business when visitors from East Bum-Fuck come to our city. If you are wondering where East Bum-Fuck is, it is anywhere more than a hundred miles from the intersection of State and Madison, in any direction. Michigan, Indiana, Wisconsin, Iowa?—all of it comprises East Bum-Fuck. And if you inhabit this geography, you are a shit-kicker, a stump-jumper, a hick.

Now, don’t get me wrong—there is nothing wrong with being a hick. Hell, I love the music and the BBQ and hey, somebody has to milk the cows, breed the pigs and pry eggs out of the chicken’s ass. It may as well be you.

Whenever I’m downtown, I inevitably run across a couple of squirrel-poachers staring up at the tall buildings, slack-jawed and wistful—or they are at Garrett buying the caramel-and-cheese popcorn mix for the price of an organ transplant, drooling with each mouthful. You see, back home,  in Paducah? They eat gophers and bite the heads off of frogs. They are often at Millennium Park making faces in the reflective surface of “Cloud Gate” which must fulfill Anish Kapoor to no end.

The hipster shit-kickers—and yes, sadly, there is such a thing—are all up at Five Corners in Wicker Park making it a more ass-clown destination than usual. You can tell who they are because they are the ones talking to the crusties—the white guys with dreadlocks and mangy dogs and backpacks.

Seriously, these fuckers eat opossums. I have to stop myself from pointing them out to the muggers.

The carriage horse thing bugs the hell out of me. The horses always look sad and my friend Melanie Adcock tells me their hooves are unshaven and unkempt and badly shoed. I’ll take her word for it seeing as I don’t know dick about horses other than to bet on them on occasion.

And the jockeys in the Charles Dickens garb driving the carriage? They don’t look thrilled either, nor does it feel like they’re very adept at navigating traffic. They look like they might be thinking that some other life choices might have been more prudent, like maybe sticking it out  for another year or so of college wouldn’t have been such a bad idea.

The horses are mostly draft horses—big, beautiful, working breeds like Clydesdales without the fuzzy boots. I feel bad when they get flustered and tangle with automobiles—you can tell they are panic-stricken and the doob-pilots driving them? Not exactly horsemen. Not to mention they pose a threat to pedestrians, cyclists and everyone else moving around the streets.

It seems like this horsey-ride pantomime is done for the benefit of tourists. So Uncle Homer, Aunt Sissy and their children Squinty and Otis can enjoy the city the way shit-kickers do in Orlando or Branson.

Do they want to take the architectural boat tour, a truly enlightening afternoon? Do they want to go to the Art Institute and see one of the world’s great collections of art? Do they want to watch the World Champion Chicago Blackhawks decimate mere mortal hockey teams? No-o-o-o. They want to cram cheese-flavored popcorn in their pie-holes in a horse carriage, and stare up the sphincter of a draft horse on their way out to Navy Pier.

It makes me sad for the horses that they have to drag slap-dicks from Omaha around. It isn’t necessary. It doesn’t make this great city more cosmopolitan or sophisticated. It makes us appear what this practice actually is—thoughtlessly cruel and blind to the pain we inflict on animals for mere appearances. This is beneath us, and it should go away. You want to ride around like a goof? Take a pedicab. You’ll still look like an asshole—but a more humane asshole.

At times like this, I feel like we should charge a dick-head tax to get into the city of Chicago, an extra toll to keep the drool-cases and mouth-breathers out. Five or ten bucks per carful of dopes. Maybe make them wear a special helmet so they don’t hurt themselves. In fact we could make it mandatory and RENT them to the hicks. Just an idea.

And as you know: Ideas is my middle name.