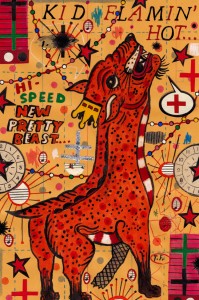 As a kid, I liked making imaginary animals, beasts—lions with eagle heads, snakes with baby heads and naked women with bird heads. I had more fun drawing things and animals that didn’t exist except in the curious neighborhood of my own head. I remember Johnny Carson would have Jim Fowler, the animal expert from “Wild Kingdom,” on his program. Fowler often brought odd and frightening creatures to scare the shit out of Johnny—pangolins, vultures, hyenas and all manner of large constricting snakes. Once he brought a Bateleur eagle that took a monstrously slick, sticky shit on Johnny’s desk and Botany 500 suit, and Carson about puked before cutting to commercial.

Mutual of Omaha’s “Wild Kingdom” was one of the highlights of my childhood. The show’s host was the avuncular and kindly Marlin Perkins, who was at one time the director of the Lincoln Park Zoo. He may not have looked it, but he was a badass: his specialty was reptiles, particularly venomous reptiles—the best kind! This staid, genial older gentleman had survived many bites from poisonous snakes, including a Gaboon viper—which is lovely and deadly in equal measure.

What I loved about Perkins were his genial descriptions of Stan Brock and Jim Fowler fighting a twenty-eight-foot Anaconda and damn near dying in a swamp in Central America as if it were a cakewalk. Stan and Jim finally get this leviathan into a sack and they are covered in blood, shit and snake-snot while Perkins chuckles, and adds “Quite a workout, eh guys?” Then he smoothly segues into a commercial for insurance, like so: “Jim and Stan just tussled [tussled!] with a very dangerous and large constricting snake. One mistake and they could have been seriously injured or even killed. If you ever have to fight a large constricting snake, it’d be prudent to have coverage by Mutual of Omaha insurance.”

Over the years I watched Jim and Stan stare down all manner of monstrous fucking animals. I swear that poor Jim nearly got ass-raped by an orangutan once. He was clearly horrified,when it became evident that the ape was in the mood for love and about to mount the baloney-pony with the perplexed zoologist. All the while, Perkins would chuckle, “Ah, primates. So much like us, eh Jim?”

Animals became fascinating, and preferable to people for me. I remember wishing that wolves were indigenous to Chicago and would eat some of my teachers pack-style. In fact, I made actual drawings of this in an effort to will this episode into reality.

After seeing all of these oddities, I began to think some of the creatures I was making up might actually exist somewhere in the world. I particularly liked strange animals like civets, meerkats, wolverines, badgers and Tasmanian devils–vicious, feral-looking motherfuckers who love you not. They seemed to all be small and mean and built out of knotted muscle and low to the ground, for violence and grievous bodily harm.

A couple of years ago there was a screamingly funny YouTube video about the honey badger–and how honey badger didn’t give a shit. In it , the honey badger runs amok, fucking up every other creature in sight, including a cobra–who bites the demonic beast and we think, “Oh, he is fucked now,” but no. After passing out for about three minutes, he awakens and continues to kill the shit out of the cobra and then eats him—all five feet of him. Then he trots off in search of some other luckless creature to fuck up. The video is funnier than hell and also makes the point that nature is mostly around-the-clock murder. No right. No wrong. Only consequences.

Nature is not baby seals, all wet-nosed and doe-eyed. Nature is a Bengal tiger chewing through your pancreas to get to the good parts. Every time I see a video of some asshole out there trying to make friends with grizzly bears like in that Werner Herzog documentary, I immediately want the grizzly bears to eat them.

Hey, here’s a novel idea: Why don’t we leave wild animals the fuck alone. You know, stay the hell out of their yard. Don’t piss them off. Don’t have zoos or any of that shit. You want to see a snow leopard, watch the Bug Channel. Don’t fuck around with them. It’s a bad idea whenever some taxpayer gets eaten by a cougar or a bear because they destroy the animal. Me? I’m grateful that this human is no longer in the world. Who knows what else they would diddle and dick around with, and eventually fuck up, were they still around and drawing breath? I can think of a great many dopes and dip-shits that the world will not miss. Like the “Crocodile Hunter” guy, he had to go fucking around with that stingray, and for what reason? Who knows? Hell, Mr. Crikey was on vacation and for no good reason he had to be a pain in the balls to the fish and he finally got nature’s ultimate “fuck you.”

Naturally fans of the show pitched an ass-ton of boo-hoo, and Poor Steve, and all kinds of weepy shit. Not one person asked the easiest question: “Why didn’t he just not fuck around with the poisonous fish?” It’s called “natural selection” and the stupid die.

As you carve the ass out of your turkey this Thanksgiving, keep this in mind. Sometimes you eat the bear, sometimes the bear eats you.