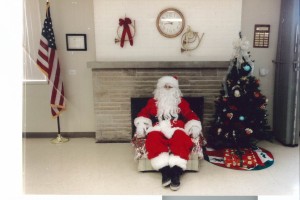 Our author in his disguise

A couple years ago, I took a job working with kids to supplement my lavish freelance income. When I applied, I was under the impression my duties would be to provide after-school homework help to elementary age kids. But what it actually consisted of was playing basketball with a bunch of eight-year-olds and teaching them the importance of not hitting each other in the face with their hats. It was awesome.

On my first day at the school, my new boss pulled me aside: they needed someone to play Santa at their upcoming “Breakfast with Santa” event, and she was wondering if I’d be up for the job. Breakfast with Santa, I would later learn, consisted of kids taking turns sitting on my lap, telling me what they want for Christmas and eating cereal while their parents snapped pictures.

Now, Santa and I share very few characteristics, physically or personality-wise. We’re white guys who love cookies and are generally pretty pleasant, but I think that’s about where the similarities end.

But I was too chicken to say no on my first day of work. I decided it’d be better to make a fool of myself trying.

About a month later, with the breakfast fast approaching, I found myself regretting my decision.  Initially, my reservations stemmed from a sense of impending embarrassment. But soon, a greater fear took hold: What if one of these kids figured out I wasn’t Santa?

I mean, everyone stops believing sooner or later. But what if—you know, what if I ended up being the reason some seven-year-old stopped believing?  That’s not how it’s supposed to work. Kids are supposed to find out Santa’s not real the old-fashioned way—from their friends at lunch. Not inadvertently from a twenty-something with a mild hangover and bad acting chops.

I tried to develop my Santa Voice. My natural tone is somewhat deep, but it’s a total Young Guy voice—I say “like” a lot, and “total,” and have the vague sound of being on muscle relaxers all the time. So I kept repeating, over and over, “And what would you like for Christmas?” in an over-the-top baritone.

But it didn’t work.

I sounded nothing like Santa, especially when I tried mimicking his iconic laugh—Ho ho ho!  Too self-conscious to push it all the way, I settled for a half-assed he he he!, the half-hearted chuckle of a self-conscious Kringle.

“It’s OK,” my friends all said.  “It’ll probably be easier when you’re in costume.”

When the day arrived, I was presented with a most curious wardrobe. The red hat, coat and pants, big belt and wig and beard, white gloves and black booties meant to cover my shoes—all of it seemed meant for a much shorter, wider man with smaller feet than I—in other words, Santa Claus himself.

The pants and coat were far too large, and the belt—I’ve always been partial to the sash—did very little to help matters. The wig hung down into my eyes, and the beard—bigger by far than the circumference of my head—was stained yellow by the mouth of the last wearer, who apparently smoked six packs of Camels each day, drank a lot of Dunkin’ Donuts coffee and possibly had an opium problem.

In the extensive canon of famous Santas, I was somewhere between that dude in “Home Alone” who gave Kevin McCallister Tic Tacs and the crazy drunk dude in “Miracle on 34th Street” who had to do something to keep warm.  I was slightly better than Jack Skellington, but only because I didn’t hand out any severed heads. And again, only slightly.

But here’s the thing: The kids totally believed.

Despite the fact that I was clearly a thin twenty-something in a fat suit wearing Sperry Topsiders, as though Santa were a member of Vampire Weekend, they just believed. Sure, one kid cried out in pure fear. But this other kid sat on my knee, smiled and politely thanked me for the gift I brought him last year.

I’m probably by far the most disturbing-looking Santa—far closer to Heath Ledger’s Joker than Tim Allen’s charming turn as St. Nick—those parents will ever photograph their child with. But I suspect I was far from their worst Santa.

I really wanted to be Santa for those kids. If I could’ve given them the action figures, ice skates and video games they wanted, I totally would’ve. But alas, I was just a moribund young guy with seventy-nine dollars in my bank account and absolutely zero elves at my beck and call. Still, I have to think intent counts for more than means.

Now, two years later, I’m wondering if maybe the lesson is that faith trumps doubt, and that a person’s belief in something—a team, Santa Claus—will always be stronger than any evidence to the contrary, even if it’s a blue boat shoe where a black snow boot should be. But back then, I’m not sure I learned too much from the experience. I was too angry at my boss for making me wait alone in an office for all the kids to leave so they wouldn’t see Santa drive away in a Ford Taurus.