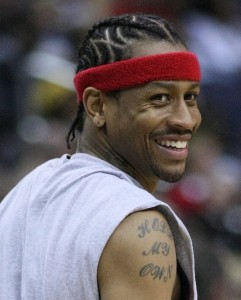 It’s snowing in Chicago, our first one this year. The air is gray, the trees are wet and white and their limbs are flowing. I’m at home in the afternoon, flopping on a futon—heartsick, “writer,” bored, lazy, “existentialist”—watching entire NBA games from 2001, on YouTube. Perhaps there are better uses of time.

I’d been using most of my time the past few weeks to do excessive counts of vain push-ups, of vain pull-ups, and to miscalculate strategies to reign supreme in the abyss of online dating.

I’d be one of the Midwest’s premier cyber egotists, splaying the various limbs of my social-sexual “game” to maximum shine. I’d carry my bold new chest to O’Hare on the week of Thanksgiving, and breed curiosity in the flying hearts of America’s urbane not-so-youth. Their taut bodies would shiver, their pearls of eyes would blink ceaselessly as they buckled in for the clouds.

My father’s brother, a genuine turd king, would lean in respect toward me over the turkey. I’d hold a leg of the bird in each hand, and clobber him with either if he spoke out of turn.

But instead, I’m in front of part six of fourteen of this Lakers-Sixers classic. Allen Iverson is about to score fifty-one and swag-step over some dude’s fallen body, make him a dunce in front of all for the crime of trying to guard him.

I’m on the verge of deleting my smile from the date-web once I see my ex-lover on the site, and recall our own old days of glory. I’m better than this anonymity, than this flea market of pretty sadness, I tell myself. I begin to poke my ex with text messages.

She alerts me to the snow. I haven’t noticed it out my window, and I feel God or the illness he stands for smack me in my face. When my uncle saw her, the striking ex-her, on Thanksgiving last year, he told me “you’re in for a lot of work.” Perhaps I shouldn’t meat-mash such prescience, however smarming it may be. Perhaps this man who’d once duped me into a pepper-eating contest that made me vomit for hours was actually a conduit of the universe, speaking in language of heavy truth.

A different man I’d seen that morning, on the eve of the snow, had told me how at my age God had inoculated him suddenly, how he’d put a jolting fire into his body that gave him endless agency, endless purpose. “I can do anything,” the man said.

Maybe such singular grasp cannot come to a person of such petty, low-minded aims as I am; I want to be a star! I want to have enough clout of capital and desire enshrouding me to make excuses away from these holiday rituals. Being near so much of my blood, it whacks me into the Earth so jarringly, it exposes my weaknesses so seamlessly. I want to be the one above such vulnerability, above such simpering meek nonsense that is love.

This in no small part because my sense of such a thing, of “love,’” it’s been confounded and strengthened, imperiled and validated by her, striking her. As we text on and I email with a friend in Austin about my arrival, it’s unclear to me what she is in my world. Once co-anchored, now set free, there’s only “we” when we’re talking.

The “I” that’s forming after her knows little as firmly as he knows his distaste for these times, for these forceful gatherings and aggressive storytelling. I’ll have to explain away my deficiencies to these people who share them, who know I haven’t found the cure. I’ll have to imagine my thought-sloth paws into the jet trails of my star’s ascension, and hide my sadness behind nothing jests, if only for the play of emotional survival, hoping the family will play their parts and abide me. I thank their trying.