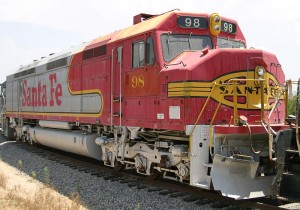 My grandfather’s hands were large, his knuckles knobbed like branches, his palms calloused from years spent on my family’s farm in Blackford County, Indiana, and from working the line at the Delco Battery plant in Muncie. But he handled the pieces of his Lionel model train with ease, lifting the cars from their plastic casing one by one, connecting the couplers end to end with the sort of precision mastered only with practice and care.

There was a Santa Fe locomotive, silver and shiny, with lights that flashed as it whistled, with red and orange stripes painted down either side. There were cargo cars: yellow, blue, brown. Some had plastic windows, or tiny handles on doors the size of my child thumb. The wheels were small as dimes. My favorite car was the caboose, painted red of course, with a tiny black gate at the rear.

The train came out of its box just once a year, at Christmas, when gifts were piled around the tree set up in my grandparents’ living room. As my grandfather built tunnels with the boxes for the train to run through and tinkered with the speed settings on the transformer, my grandmother worried the tinsel on the tree, and turned the ornaments so they faced just so, and wondered aloud if the star atop it all was crooked. All the fanfare, all the fuss, it was all for us, their grandchildren.

I used to place my index finger on the rails and wait as the train rounded the track, my small heart pounding, only to pull away just before the train could run my finger over. When this became boring, I lay my cheek on the track so that I faced the oncoming  train. I closed my eyes so that I had to rely on the pitch of the whistle as the train neared to know when to lurch away. The thrill of this game sent an electric wave through my skin, made me feel like I’d avoided a more serious danger than was actually at hand. When my grandfather caught me doing this, I got scolded and the train was temporarily shut off. But this never lasted very long—he always turned it back on. He loved that train more than we did.

I was perhaps eleven or twelve—old enough to feign nonchalance—the Christmas the train stayed in its box, which was stowed under my grandparents’ bed or on the top shelf of their bedroom closet, or some other location off-limits to me and my sisters and my cousins. Months before, my grandfather had been diagnosed with Parkinson’s. It’s a ruthless disease, cruelly crawling through the body’s nervous system, absolute in its attack. The man who had once swung me onto his shoulders, who had worked the rows of my family’s garden in the July heat, who had helped my father build our house, now walked with a cane. Later, when his stride became a mere shuffle, when the soles of his orthopedic shoes rubbed whispers with the carpet, he needed a walker. And after that, just before the end, a wheelchair. When my grandfather developed a tremor that made it impossible for him to complete simple tasks—he could not tie his shoes, button his pants, or bathe himself—my grandmother did it all for him.

One evening just before he passed, my grandfather wept, wetly and openly, at the dinner table. He could no longer feed himself. My grandmother fed him bite by bite, held his straw between his lips, wiped his tears. I was thirteen at the time—painfully conscious of my own lanky limbs, my frizzy hair, the braces fencing my teeth. I worried about being the ugliest of my sisters. I worried about kissing boys. I worried about wearing the wrong clothes. I felt embarrassed for my grandfather for the ways in which his body had betrayed him, for his loss of strength and dignity. And I pitied my grandmother for this monumental burden she shouldered, for caring for a grown man as she had her children.

Now I think of this, and all I can think is love.

The last Christmas before my grandfather died, that model train was the furthest thing from our thoughts. I suppose it’s still in its box under my grandmother’s bed, although I know that my cousin Quentin, being the only male among the grandchildren, will inherit the set by default. I hope, if he has children, he’ll set it up every Christmas. I hope he’ll build tunnels among the gifts. I hope he’ll set the speed to high and let her go, just to hear the whistle squeal, just to hear his children laugh.