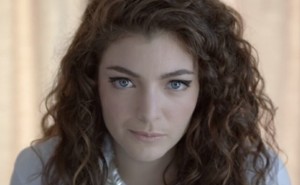 Lorde, in a screen shot from the “Royals” video

If you’ll indulge me, I’d like to depart from my usual Chicago-centric focus to explore a question that’s been puzzling me for a while now: is Lorde’s hit song “Royals” pro- or anti-public transportation? Depictions of various travel modes in pop culture influence listeners’ commuting habits. While everyone from the Beach Boys to Public Enemy has written tunes glorifying cars, there are precious few that make mass transit sound like a cool way to get around—“Kiss Me on the Bus” by the Replacements springs to mind.

I was hoping to chalk up “Royals” as one of the latter. By now you’ve probably heard the smart, minimalist electro-pop earworm by the seventeen-year-old New Zealand wunderkind, real name Ella Maria Lani Yelich-O’Connor. I confess that I spent a recent Sunday evening listening to her album “Pure Heroine” over and over while I did housework—it’s that good.

The single has attracted plenty of attention for its lyrics, which express disdain for the material trappings of wealth and fame that most pop songs glorify, noting that these things are irrelevant to the average teen. “We’ll never be royals,” she sings. “It don’t run in our blood / That kind of luxe just ain’t for us / We crave a different kind of buzz.”

Blogger Verónica Bayetti Flores recently argued that the song is racist. She noted that the things Lorde, a Kiwi of Irish and Croatian ancestry, ridicules in the chorus include gold teeth, Cristal champagne, and Maybach sports cars, status symbols associated with African-American hip-hop stars. However, others have pointed out that the singer also scoffs at “Trippin’ in the bathroom / Blood stains, ball gowns, trashin’ the hotel room,” not to mention “Jet planes, islands, [and] tigers on a gold leash,” which are all fairly universal forms of douchebaggery.

Setting that controversy aside, what’s Lorde’s perspective on transportation? We know she dislikes Maybachs, but after cataloging the various celebrity clichés, she defiantly belts, “We don’t care, we’re driving Cadillacs in our dreams.” It appears that she does have an affinity for flashy cars, it’s just that she prefers ones built for comfort rather than speed.

However, in the second verse she reveals herself to be a transit rider. “My friends and I, we’ve cracked the code,” she sings. “We count our dollars on the train to the party / And everyone who knows us knows, that we’re fine with this / We didn’t come from money.” These lyrics perfectly convey the satisfaction of independent travel for teenagers, which is well facilitated by public transportation, especially if they’re going to be drinking. It’s legal for New Zealand minors to imbibe at house parties. I’ve often seen this kind of happiness on the faces of Chicago youths riding the Red Line to Belmont.

Also, the bleak, arty video for “Royals” features a quartet of Lorde’s gawky-but-handsome real-life schoolmates waiting for a commuter train in their hometown of Auckland, apparently heading to or from a “piss up” (Kiwi slang for a party). It’s not the most glowing depiction of public transit though. The boys all look exhausted, one lies flat on his back on the platform, and another leans his head at a forty-five-degree angle on a glass shelter and stares blankly into space.

It’s worth noting that the gritty, underdog tone of the lyrics and video don’t reflect Lorde’s upbringing. As the daughter of a civil engineer and a prize-winning poet, she likely had a comfortable childhood. Rather than the “torn-up town” referred to in the song, she’s from Devonport, a quaint, historic suburb on a harbor-side peninsula, known for its waterfront restaurants and bars, bookstores and boutiques.

How likely is it that the singer grew up as a public transportation rider? Despite New Zealand’s progressive reputation, Auckland, its largest city with a metro population of 1.5 million, is far from a transit paradise. The town generally gets high marks for livability, but one of its Achilles’ heels is traffic headaches due to a car-dominated transportation network.

In 2006, only nine percent of trips were taken by bus, train or ferry, compared to Chicago’s current 26.3 percent transit mode share, and Auckland Transport’s four train lines only connect the central business district with the west, south and southeast sides of town. Devonport doesn’t have rail access, but it’s only a fifteen-minute ferry trip from downtown. So it’s entirely possible that Lorde and her mates used to ride the boat to the CBD, walk five minutes to Britomart Transport Centre, and catch MAXX trains to various shindigs, counting their “kiwis” (New Zealand dollars) along the way.

At any rate, she was obviously thrilled when the lyrics to “Royals,” the third song on the album, recently appeared on the ceiling of a public bus in her hometown. She tweeted a snapshot of the ad with the text “bus #2215 in auckland. TRACK THREE.”

After some digging on the Internet, I finally found a quote from Lorde that nicely sums up the meaning of the song, as well as her relationship with mass transit. “I’ve always loved hip-hop, but as a fan of hip-hop, I’ve always had to kind of suspend disbelief because, obviously, I don’t have a Bentley,” she told NPR. “There’s a distance between that and the life I have with my friends going to parties and getting public transport and doing the things that every other teenager does.” Granted, that’s not the ringing endorsement of the car-free lifestyle I was looking for, but I don’t think we’ll catch her driving a Cadillac anytime soon.