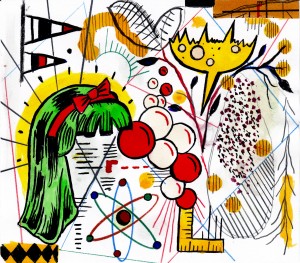 This, another of my “Lunch Drawings,” came from an encounter with some drunk girls at Black Dog, the greatest gelato place in Chicago. These young women were shit-faced and trying to eat gelato, string noun and verb together, and play with my dog, Chooch, who ate their gelato and they giggled until one of them puked like a fire-hose. It was a serious puke with the projectile force of a jet engine—even my dog got the hell out of the way.

I was terrified her friends might be tempted to join in with a “sympathy puke,” seeing as they were all pretty hammered. Though I feared it might turn into a group puke-a-thon, luckily it was just the one poor girl, so I decided to help.

I held her hair so she wouldn’t puke in it, and then they cried and told each other they loved each other and they loved me for not letting their friend vomit in her own hair. There was some puke on my shoes but it was no big deal. I felt bad for her; I can remember many a night this also afflicted me. It also occurs to me that women are nicer drunks than men—or at least the men I knew when I drank.

When women get drunk they puke or pass out, they cry, assure everybody they love them and go home. When guys get drunk, we go to White Castle, get in a fight and go to jail. Somewhere in there is some puking and passing out as well—I just don’t quite remember where, but you get the idea.

I decided to give the young women a tutorial in drinking so I told them to stay away from the sweet shit, that if they start out drinking vodka, bourbon and beer then, goddamit, they should stick with vodka, bourbon and beer. I told them it was the appletinis that fucked their night up, and that NO guy wants to knock boots with a gal who would pour apple juice into perfectly good vodka. Really, what the fuck IS that? I often lament that serious drinking has gone to hell since I quit. Most men would sooner go home with a girl with a string-wart.

Maybe don’t approach strange dogs when you’re stinko. Chooch is a sweetheart, but roll up on and kiss the wrong dog and he might bite you in the face or the tits. In fact, when you’re shit-faced it might be a good idea to avoid animals and my friends altogether. Nothing worse than waking up with dog-hair all over you and your panties in your purse. Or, maybe nothing better; I guess it is a matter of perspective. And guys, if you wake up with panties still on your head, really, give them back. Don’t tack them to your wall with the beer-mirrors or anything like that. Women take a dim view of this kind of decor.

I have to admit to feeling a little fatherly among the young drunken women—a bit protective. I am at the age where these kids could be my kids, but not that old that I don’t remember getting hammered and losing my shoes and my car keys and once waking up in Iowa with a girl who was studying animal husbandry. I don’t know whether I looked like an animal or a husband but as I hitchhiked back to Chicago I discovered a bunch of marbles in my pocket. Who knows.

I’ve decided, since I am kind of a public servant now, to bestow some tips on drinking before you all go and fuck up your holidays. Here are a few pointers so that you don’t go beating the piss out of Santa Claus at the mall.

1. Brown liquor is fucking Satan. Go to any AA meeting and the guys missing limbs, teeth and sporting a metal plate in their heads usually drank Jack or Beam.

2. If you’re the kind of person who does not know when to shut the fuck up when you’re sober, DO NOT DRINK VODKA.

3. If you drink a lot of beer or wine, you drink a lot. It is amazing the number of people who don’t consider beer or wine consumption actual drinking. Tell that to the tow-truck driver when he’s pulling your Volvo out of a ditch.

4. Don’t drink with your boss. Really, you never know when the instinct to tell them what a cheap, ignorant, walking stack of monkey-shit they are may raise its ugly head.

5. Don’t drink with your in-laws. Do I even have to elaborate? I have a friend whose sixty-year-old mother-in-law liked to wear tube-tops. One holiday, after a tequila front blew through, he posited: “Hey Toots, I suppose those stretch-marks are from cheerleading?” He now lives with two cats.

I hope my tips will help you this holiday season. I understand the instinct to imbibe during the shit-show of X-mas and New Years. Pain-in-the-balls relatives. Spending money on stupid shit nobody really needs. And all of the “Merry Christmas” dip-shits out there. Whenever anyone tosses this off to me I desperately want to say “Fuck You, and all of the reindeer, Rudolph, extra hard,” but it is kind of a mouthful. Good thing for you that I don’t drink anymore. Cheers!