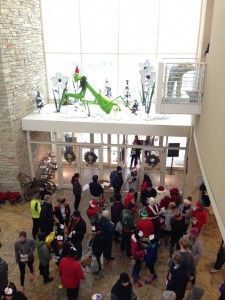 Santa and Mrs. Claus mingle with runners before the race

Breakdown:
Who says you have to go to the suburbs for a challenging trail run? After this morning’s snow-filled Jingle Bell Run/Walk for Arthritis, Chicago can boast a race to compete with the best of them —and it takes place right in the heart of Lincoln Park! Starting and finishing in front of the Peggy Notebaert Nature Museum (where most of the brave participants took shelter up until a few minutes before the race kicked off) this large but generally low key charity run morphed under a thick layer of fresh (and constantly falling) snow into a winter wonderland of trail running delight.

But while the snow certainly added a level of difficulty to the proceedings, the temperature (hovering just around 30 degrees) kept it from being a true slog. 10K runners took off on a mostly unplowed course through Lincoln Park at 9am with 5K runners following shortly thereafter. Smiling volunteers lined the course at various intervals, giving out encouragement and high fives. And the picturesque views throughout made any complaints about the course seem frivolous. As runners, when we approach a course like this, we are generally saying (though not in so many words): “My life is cushy enough that I feel the need to introduce arbitrary obstacles into it so that I may overcome them.” This morning the Jingle Bell Run/Walk provided just such an obstacle. And it was a blast to overcome it.

As an added bonus, Santa and Mrs. Claus were waiting inside after the race where runners could get a photo with them.

Price: $35-45 for the 5K, $45-55 for the 10K
Course: Starting and finishing on the trail just east of Cannon Drive in front of the Peggy Notebaert Nature Museum, the 5K trail circled around Diversey Harbor and the South Lagoon while the 10K trail headed all the way up to Montrose Harbor and circled Cricket Hill. Both were snowy and beautiful.
Organization (gear check, etc.): Packet pickup on the day of the race was quick and friendly (and they allowed this unprepared runner to drop from the 10K to the 5K without any difficulty. Gear check was friendly but quite slow.
Goodie Bag (includes shirt): A long-sleeve dark green cotton t-shirt. Typically not my favorite but the heavy-duty fabric and the shoe design draw me in. A number of flyers and a jingle bell necklace are also included in the goodie bag.
Weather: “Think of what this weather could be!” the race director remarked last year about a drizzly forty-five degrees. How prophetic. Still, I’d take 30 and snowy over 45 and drizzling any day. (Zach Freeman)