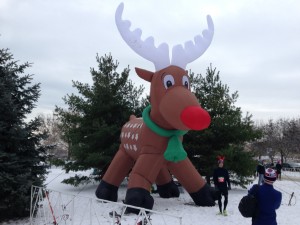 Early on in this packed race it became readily apparent why it’s called a “ramble” and not a “dash” (though the Donner Dash is the kid’s race that’s tied in with the Rudolph Ramble). With 1, 600 participants, the running paths chosen for the course would have a tough time accommodating everyone on a good day—and Sunday was not a good day. With temperatures in the low teens and mounds of snow left over from Saturday, this course became a bit of a cold slog right from the start, with lengthy backups and crowded conditions throughout. In areas where the trail doubled back on itself, dividing the already narrow trail in half, running became even more difficult.

Early on I watched as a faster runner passed a group of only slightly slower runners by dashing through the snow beside the trail—one of them remarked to his back, “If you want to sprint, go home!” Those are unfortunate conditions for a running event, even if it is a ramble. A waved start or even extended pace groups (the designated pace markers were quite close together) might have helped to alleviate some of the clustering, as would a little bit of plowing or shoveling along the course (in many areas the trails were much thinner than usual because of the heavy snowfall).

Still, these conditions bring about an air of adventure and challenge and running through a snowy Lincoln Park is a sight to behold, even if you’re doing it with several hundred other people. A sunglasses-wearing Santa Claus was on hand for pictures after the race.

Course: The trails could have used some clearing for the number of runners attempting the course and less doubling back would have been helpful. The sections in Lincoln Park were lovely (if crowded) but the portion on the Lakefront Trail (which headed as far north as Belmont Harbor) felt a bit crowded. Support along the course was plentiful and encouraging.

Organization (gear check, etc.): Not pre-assigning numbers meant that pre-race packet pick-up could take place at all three Fleet Feet locations, making it quick and easy (smart move). Base camp was well-laid-out but much too cold to stick around for very long—too bad race organizers couldn’t get the Peggy Notebaert for an indoor base camp as Gatorade at the finish line was partially frozen.

Goodie Bag: A choice between three color schemes for a “Retro Knit Ski Hat” that is well-made, comfy and stylish. Foam reindeer antlers and a red nose were also passed out on race day.