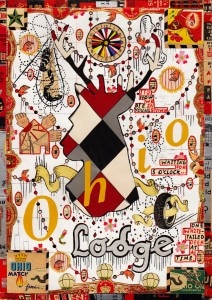 He stayed upwind of the doe, and exhaled slowly, without sound. He’d have liked to have gotten closer but, as far as he could tell, she’d not caught on to any of his scent yet. From this distance, eighty yards or so, the wind might play hell with the flight of the arrow. He wanted a clean kill; he didn’t want the doe to suffer unnecessarily. One through the ribcage would end it quickly. All vital organs right there—heart, liver, lungs (any one of them would do) would put meat in the refrigerator for a winter or so. His family wouldn’t be hungry—job or not.

He only hunted for meat. Food on the table. He never understood trophy-hunters and kind of regarded them the same way he thought of the guys who drove Porsches and joined  the country clubs—always needing to prove they had some sack. It reminded him of the line in “Full Metal Jacket” when R. Lee Ermey asks one pathetic recruit: “What’s the matter numb-nuts? Didn’t Mommy HUG you enough?”

He laughed to himself for a second and then thought, “Say this for the assholes, at least they’re not out here, tromping through the slush, looking to kill their dinner. Fuck me.”

He sighted the arrow almost at the same time.

He’d already gotten the kids some Christmas gifts; cash scraped together from shoveling walks and driveways and building a couple of decks. He’d seen the layoffs coming and made sure he was ready.

His son wanted the new “Minecraft” game  for the computer—whatever the fuck that was. And for his daughter he got “Dance Dance Revolution,” again having no earthly clue what the hell it was. When he was a kid all he wanted was Hot Wheels—little Matchbox-sized cars he dreamed he might one day have in their full size: a bitchin’ ’69 GTO, or a Shelby Mustang, something with balls and octane. Something loud and American.

His friends all wanted G.I. Joe with the kung-fu grip, which he thought was kind of a pussy gift. He was twelve, he didn’t need to be screwing around with dolls.

He’d gotten laid off two months ago. Most of the tool-and-die-making in Youngstown was gone, along with the machines the tools were made for. The jobs and manufacturing outsourced overseas where there were no unions and no shortage of cheap labor. It was really all he knew. He was handy, but so was every other working man in Youngstown. They used to joke that they’d become a town full of “Schneiders,” referring to the handyman in some sitcom he didn’t remember anymore. It used to be a funny thought. Now? Not so much.

Jadiewicz handed him his last check and couldn’t look him in the eye. He just off-handedly said, “It isn’t right, bro. I’m sorry.” He just nodded and thanked his boss, all the while stepping toward the garage. They were friends and neither of them knew what to say, and then realized there was nothing to say. It’s just the way it was.

For a couple of weeks, he hung around the Home Depot and hired out for day labor and fix-it jobs. He made just enough to stay respectably broke, able to pay for his beer and the occasional  quarter-ounce of chronic as well as putting away some scratch for Christmas—which  was a month away and nothing in the landscape would let him forget it.

There were assholes in Santa suits outside every store running their head about the sale of this or that inside. It pissed him off. Living hand-to-mouth, being afraid every minute of every day, and they still cannot stop selling him the endless product.

One saleslady, who he’d gone to high school with, tried to sell him a cheaper computer game, telling him that “‘Minecraft’ is cost-prohibitive, given his situation.” He looked her in the eye and told her: “What situation—because I’m out of work I can’t get my kid the good game?”

He was furious. In fact, he thought he’d never been so mad in his life.

He looked her in the eye and in a low, even voice said, “Just fucking wrap it.” He couldn’t stop staring at her and she finished the sale. He thought for one insane second he might hit her, and then put the thought out of his head. She tentatively handed him his gift and started to speak. He shook his head at her and walked away.

He aimed the bow and let the arrow fly in one fluid motion. It struck the doe just below the haunch, in the belly, the four-sided razor point slicing through viscera and organs. It wouldn’t be long. The doe ran like hell for about fifty yards and then, all of a sudden, just appeared to sit down, one back leg splayed out to the side.

As he walked up he realized she was staring right at him, her eyes large and liquid, unblinking pools of black just boring into him from the snow. It shook him for an instant and, for a moment, he wanted to turn and run. It was unnerving watching the doe’s side gout black blood while she serenely regarded him. For a second he wanted to speak, and then shook his head.

She kept staring. He turned his back and fished in his pocket for a cigarette. He lit it and he swore he felt the doe’s eyes softly on his back. He sat in the snow and shakily re-lit his Camel Light.

He wanted to be anywhere else. He took out his phone and checked the time and temperature. It was nine degrees. It was December 22nd.

His bottom lip started to tremble.