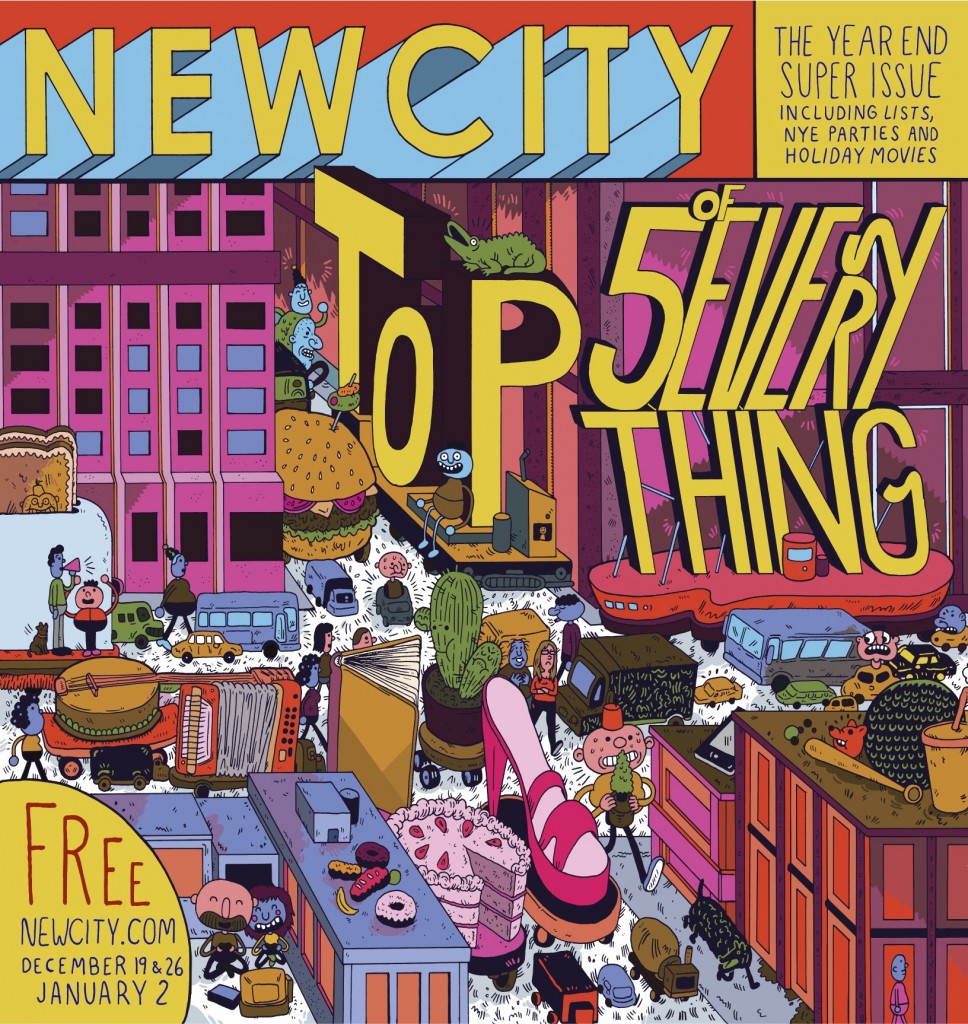 1. As a rejection of the end-of-the-year-list obsession in the media in Newcity’s early days, we decided to do Top 5s, instead of the usual Top 10s, and keep the lists minimal in exposition.

2. Critics would be forced to make hard choices rather than the waffling namby-pamby approach so irritating in other media (honorable mentions, etc. etc.).

3. Our critics figured out how to get around the brevity issue by creating multiple permutations of lists for their fields.

4. Somewhere along the line we added the miscellaneous lists because they’re funny and, well, we like randomness.

5. And so, eventually, our minimalist intentions became the celebration of excess you see today, nearly a hundred lists to keep your mind sharp during the brain-deadening onslaught of the holidays. See you in 2014.
—Brian Hieggelke

Top 5 Things To Take The Edge Off For Northwestern Football Fans
Hey, Illinois sucks too.
That diploma
Cajun tater tots from Rocking Horse
Malort
Women’s lacrosse season is just around the corner
—B. David Zarley

Top 5 reasons Paul Konerko re-signed with the White Sox
Wants to be present when the White Sox take it to the next level by losing their 100th game
Wants to give Adam Dunn competition as the slowest guy on the team
Wants to better his aim at throwing foul balls into the empty seats at U.S. Cellular Field
Wants to get a dugout view of another Sox fan attacking an opposing team’s first-base coach
Wants to keep wearing the alternative black home jerseys that hide his growing man-boobs
—Corey Hall

Top 5 things Richard Renteria is preparing to do as new manager of the Cubs
Take a shot of tequila every time cardboard-cutout radio announcer Patrick Hughes calls any Latino player named Luis, “Louie”
Prepare to use 2013 BP cup to lean on whenever his hip acts up
Prepare for Old Style beer-spray celebration when the Cubs win their 70th game of the season
Start preparing his exit speech for 2015
Get a privatized driver—courtesy of Mayor Emanuel—after taking a wrong turn and winding up in Boys Town after the bullpen blows another game
—Corey Hall

Top five excuses White Sox fans will continue to give for not attending home games
Prefer listening to Hawk Harrelson’s age-(very)old “Hawkisms” in the privacy of own home
Exploding scoreboard distracts them from watching the score of a Cubs game, a team they claim to hate and ignore
Prefer listening to Ed Farmer’s no-fun-allowed play-by-play call as a cure for insomnia in own home
Three train lines, an expressway, a bus line, and multiple parking lots within blocks of the Cell Block on 35th Street still make getting to games difficult
Still upset that Jermaine Dye won 2005 World Series MVP over Joe Crede, suspect a “reverse racism” conspiracy
—Corey Hall

Newcity’s Top 5 of Everything 2013: Drinking