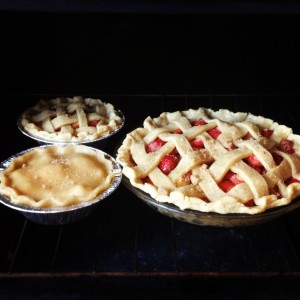 I’ve known how to bake my entire life, for so long, in fact, that I hardly remember being taught. Cookies, cakes, breads—oh, the breads: whole wheat loaves my mother would begin baking on Sunday mornings so that when we returned from morning services the entire house was filled with the aroma of it. I’d help her slice the loaves with the long, toothy bread knife we kept around for just this purpose, and we’d spread butter on the slices and eat them with pot roasts or white bean stew or chicken casserole.

But it was my grandmother who taught me to bake pies. She was known for her cherry pies, baked with the cherries she picked from the tree in her backyard; strawberry-rhubarb pies from the strawberry and rhubarb bushes grown in my family’s garden; sugar cream pies spiced with nutmeg and cinnamon; and apple and blueberry and blackberry and pecan… 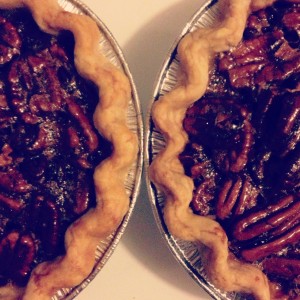 When I was eighteen, I moved to Chicago from rural Indiana to study writing, and I stopped baking. I’d like to blame it on a year living without a kitchen in my dorm room on State Street, followed by four years of living in apartments in which the kitchens had their own oddities and inadequacies that made baking difficult or otherwise unpleasant: my Albany Park apartment had a temperamental oven and an unreliable pilot light; my two different East Lakeview studios offered only mere inches of counter space, and each of those kitchens contained an oven so small it seemed toy-like and incapable of actually cooking food. And during those years I lived alone, I had no one else for whom to bake. It seemed wasteful. It made me feel lonely. But if I’m being completely honest, I suppose the real reason I stopped baking is that I stopped making time for it.

I was twenty-four before someone broke my heart.

I thought it had happened earlier, when my college boyfriend and I split up a few months after I graduated. We were together until we weren’t. Until it didn’t make sense anymore. Until I didn’t know who I was without him. I know now that that wasn’t heartbreak. That was common sense.

Last winter, when this other man broke up with me, I felt it inside of me. I swear I felt it in my bones, as if my ribs were strung together with rope and someone was yanking on them, pulling my ribs in against my lungs, constricting them like some sort of tangled kite contraption.

I lost sleep. I wasted entire weekends in bed. I stopped writing. I stopped reading. The pain was with me all the time. And I cried. A lot. I asked friends over with the pretense of drinking wine and hanging out and once they arrived, I just cried to them. I cried on the phone with my mom, even though I couldn’t remember the last time I’d called her, even though it embarrassed me. I even cried at work, until my boss pulled me aside and asked what was wrong, could she do anything, and had someone died, or what?

In the midst of all of this, I started baking again. That fall, before the break-up, I’d moved into an apartment in Ukrainian Village. I still had no counter space, but the oven was full-size, and the refrigerator, too. I didn’t have an excuse not to bake, but I’d stopped looking for one.  I wanted to bake now. I needed to. 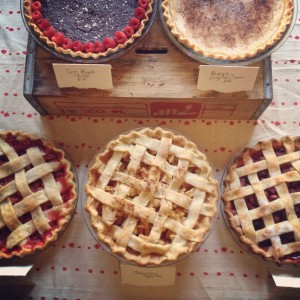 And so I did. It started with an apple pie.  At the grocery, I purchased apples—bright green Granny Smiths, shiny as hard candy. I purchased lemons—so yellow I found myself smiling at them—to juice and add to the apples to prevent them from browning. In my new kitchen, I peeled and chopped the apples. I spiced them with cinnamon and ginger and nutmeg, and tossed them in the lemon juice, and let it all marinate in a big glass bowl while I mixed the dough. I rolled out the dough with flour on the surface of my table, because I’d forgotten to purchase wax paper. The dough was too dry and became even more so as I rolled it out, and it tore when I pressed it into the glass pan. I patched the tears and shoveled the apples inside the crust, but I forgot to add butter to keep the fruit crispy. Then, after adding the top layer of dough, I tried to flute it but found I couldn’t do it anymore. My fingers were clumsy and the dough kept tearing, and I discovered I hadn’t rolled it very evenly, anyway.

That first pie was a disaster.

The second pie was, too.

My crust improved, and the filling, too. I began reading baking blogs and the “PIES, CAKES, AND COOKIES” section of my roommate’s vintage cookbook. I tried new methods for keeping fruit fillings firm. I tried different spices with my fruits, and then I tried different fruits, and then I baked a pie I’d never baked before, not even with my grandmother.

All of this baking, all of these pies, really did make me happy. I was experimenting, failing and getting better. I baked so many pies that I was forced to pass portions off to co-workers and friends, and that made me happy, too. One evening, as my then-roommate Erin and I waited for a pie to cool on the stove, I asked her, “How many pies do you think a normal person bakes a week?”

Erin stared at me blankly for a few seconds before guessing, “Zero?” 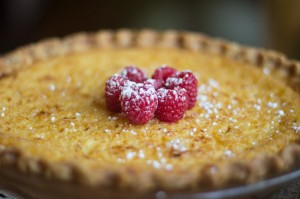 Still, I was struggling with fluting my crusts. I couldn’t quite seem to remember how to do it. I took a bus to Indiana one weekend in June just to bake with my grandmother. We spent an afternoon in her kitchen, baking her classic strawberry rhubarb pie with a lattice crust, and then a chess pie, which neither of us had baked before. She patiently retaught me how to pinch and flute a pie crust.

At some point that day, as my grandmother and I bent over the ancient Betty Crocker cookbook spread open on her Formica countertop, as we shared preferences and variations of the crust recipe she’d taught me so many years before, my grandmother asked me why I was baking again.

The pain in my chest was long gone and had been for months. But her question still brought tears to my eyes. “Well, it makes me happy,” I said. “It just makes me really happy.”