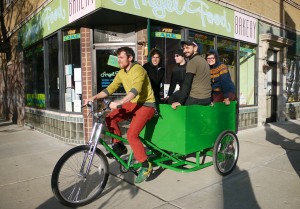 On the streets of Amsterdam and Copenhagen, parents transporting kids in “bakfiets” box bikes, and delivery riders hauling goods on two-wheeled, stretched-out “Long Johns” are a common sight, but hardworking utility bikes are still a relative rarity in this city. Ezra Hozinsky, owner of Green Machine Cycles, 1634 West Montrose in Ravenswood, is trying to change that. Full disclosure: Hozinsky is a former coworker and bandmate of mine.

“Having more of the larger cargo bikes on the street is useful in terms of making cycling a viable form of transportation,” he recently told me over pints by a roaring fire at the nearby Fountainhead tavern. “The positive aspect is that it starts to even out the size discrepancy between bikes and motor vehicles, making cyclists seem less vulnerable because it’s obvious they’re operating a machine. It may also be helpful for drivers to see more families on bikes. It can have the same effect as a ‘Baby on Board’ sticker on a car: a civilizing influence on the pace and aggression of traffic.”

Hozinsky, forty-five, opened Green Machine in September with the goal of becoming Chicago’s go-to destination for cargo cycles, as well as bikes for everyday commuting and touring. A Hyde Park native, he’s worked at a who’s who of local bike stores, including Turin, Higher Gear, the Pony Shop, Rapid Transit, Boulevard, and J.C. Lind, which also stocks European-style cargo and city bikes. Bobby Kaufman, another Turin vet, helps out with the wrenching.

While winter is the time when bike shops in cold climates lay fallow, Hozinsky says repair business was surprisingly brisk this fall. For the official opening party in October, the shop hosted the “PumpKarve-Go” event, where attendees were asked to haul as many pumpkins as possible to the store by bike to be carved into jack-o-lanterns. A few weeks later the rotting gourds were transported to a compost heap in the same manner.

Green Machine currently carries front-loading Long Johns by Copenhagen-based Larry vs Harry, rear-loading “Long Tails” by Xtracycle, and the Soma Tradesman, with a wide, flat front rack, well-suited for transporting pizza. Hozinsky thinks he’s found an effective niche. “As cargo bikes become more popular, I’m not sure the number of shops capable of dealing with them will keep pace,” he says. “Helping more people get into hauling things by bike is something more stores and manufacturers should explore.”

With gas prices on the rise and traffic woes increasing, it’s likely that more and more delivery jobs will be done by cargo bike. “They could really transform the way things are delivered,” he says. “For example, food delivery by bike is already common, and with a box bike you can carry enough food to cater an event.”

Hozinsky’s background in architecture and sustainable design came into play when he was outfitting his small storefront. “I’ve made a large effort to obtain and build fixtures that use as many reclaimed materials as possible,” he says. After taking down lath and plaster walls in the space, he donated the wood to one friend with a wood-burning stove, and another who makes wall art out of the lath strips.

He constructed the store’s workbenches, shelving and product display fixtures out of lumber from art-shipping crates, which he purchased from the Rebuilding Exchange, a local building materials recycler. Exposed brick walls give the store a bohemian feel, and thanks to excellent southern exposure, the front window is full of flourishing plants. To further reduce its environmental footprint, the shop uses nontoxic and biodegradable bike lubricants and cleaning supplies whenever possible.

Green Machine shares a hallway with AngelFood Bakery. “I spend a lot of time over there, as my winter padding will attest,” Hozinsky says. Noted triathlete Rahm Emanuel lives around the corner and often stops by the retro bakeshop for his morning Joe. “I met the mayor there once and he said he’d seen my store and planned to stop by. He couldn’t remember what kind of road bike he owns.”

The bike shop has been undergoing a renovation this month as the landlord addresses some building-code issues, but it’s slated to reopen by this weekend. In the future, Hozinsky plans to expand his services by offering custom parts fabrication and frame building, as well as maintenance for adaptive transportation like wheelchairs and hand cycles. “Several people have also asked about cargo bike rental,” he says. “That’s something I’m definitely going to look into.”

Hozinsky says his ultimate goal is to create a welcoming environment where everyone will feel comfortable exploring the world of cargo bikes and other forms of practical pedaling, not just so-called avid cyclists. “I’m interested in shifting the perception of cycling and bike shops from one of exclusive cliques to one of inclusivity and collaboration,” he says. “I don’t ever want to see the words ‘bicycle’ and ‘car’ conjoined by the word ‘versus.’”