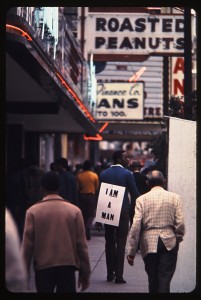 While walking through Art Shay’s exhibit at Ann Nathan Gallery, one can’t quite help noticing the “right place-right time” element in each of them. Shay as a photo-journalist, artist and observer has that thing.

That almost unnatural ability to wait for the defining, salient moment to reveal itself—and then he pulls the trigger. His photos of the civil-rights era: a black man leaving a demonstration with a sign that states  “I am a Man” slung across his back, while a crowd of white, indifferent faces pass him by—this image still cuts to the bone—and we realize it was NOT a long time ago.

This show is full of these kind of revelations—for Shay, like Studs Terkel, bore witness to a century. He’s been around for so long it is sometimes difficult to decide which Art Shay to write about: The ground-breaking Life magazine photographer? The seriously underrated artist? The best chronicler of Nelson Algren and his Wicker Park demimonde? The decorated World War II aviator who flew more than fifty bombing missions over Germany and France? The championship racquetball player?

There are many Art Shays, and I didn’t even talk about his excursions into theater.

Art Shay was born in the Bronx in 1922. World War II  found him in the 703rd squadron—famous because it was led by Colonel Jimmy Stewart, the actor, who was also a war hero. Shay’s wartime exploits are worthy of their own exhibition. Now one of only eleven survivors of the infamous Kassel Tiger Tank factory bombing, he flew many special-operations flights smuggling Red Cross supplies and internees out of Sweden. His was a harrowing service that informed the way he viewed the world ever since. His contempt for bullies and blowhards comes through in his work—his photograph of Senator Joe McCarthy is a perfect example of this. McCarthy, looking down with a crown of ridiculous candles around his head (a light fixture) make for a buffoonish and defeated martyr after the battle.

One of the great benefits of knowing Art is that he is a first-rate story teller. There is a photo of mob boss Tony Accardo trying to walk downtown unnoticed on Michigan Avenue. Shay stalked him until he was briskly walking by one of the Art Institute lions and snap there is the picture: The mob boss properly looks like a Munchkin at the foot of the lion—an almost comic afterthought.

His Algren pictures are the ones that move me the most; partly because I live in this neighborhood and despite the gentrification, strollers and general dick-headed hipsterism, there is still a whiff of Algren—and Shay around. One need only walk into Ola’s on Damen to get a look at the Chicago and Wicker Park these photographs evoke.

If it sounds like I am not exactly an objective viewer—I’m not. I’ve been a fan of Shay’s for a long time and understand his mission as an artist.

Anyone who mistakes Art Shay’s body of work for  simple nostalgia is misguided or not looking carefully enough. His work is about history. How we became who we became. We the Chicagoans. We the Americans. We, the people.

His images of Wicker Park and Algren  have no cheap sentiment in them. This was a neighborhood of immigrants, of the poor, of working people, of junkies and hustlers and whores—and Shay romanticizes none of it. For as unsparing as Algren’s prose was regarding this place, Shay matches him note for note. There was despair. There was grinding poverty. And there were transcendent moments of grace. None of it escaped Shay’s lens.

There is a grimy humanness to these works, among  the finest photographs made by an American. For my money, Shay is every bit as vital as Robert Frank, Ralph Eugene Meatyard and Weegee.

It is especially fitting that this marvelous show is at Ann Nathan Gallery. Like Shay, she is an old pro who just does it right. For nearly five decades, Ann has fought the good fight for artists and art in this city. She has hung in there through every economic dip. Through a disastrous fire and through changing tastes, she hangs in there like a pitbull and does not suffer fools. She is as fragile as a nail and she’s always put the art first. She and Shay are a good match.

One cannot mention Shay without talking about Florence, his wife of sixty-seven years, bookseller and cultural force all by herself. She operated Titles Inc., the legendary North Shore bookstore  that counted David Mamet, Joseph Heller and Billy Corgan among its devotees. Florence Shay died in 2012 of ovarian cancer. A goodly amount of Art Shay’s time lately has been putting together a show of photos chronicling their life together. This show will open later this year.

At ninety-one years old, Art’s work is still in front of him. He may be a bit slower but he never stops. Even now he knows he is our witness—he still records our events, our folly, our city as it is.

What strikes me the most about these remarkable photographs is how little he missed. Chicago writers like Terkel, Kogan, Royko and Algren gave us a voice. Art Shay gave us a face.