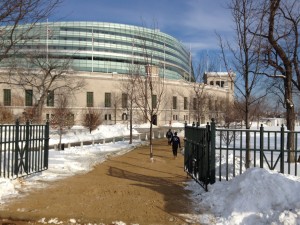 Runners walking back to the United Club after the race/Photo: Zach Freeman

Breakdown:  It’s amazing how much difference a little sunshine can make. Last year this race was a slog through snow, wind and low temperatures. This year, despite the temperature on race day actually being colder than last year (around ten degrees vs last year’s twelve), the course for the Chi-Town Big Game 5K/10K was actually downright comfortable. Luckily for runners and race organizers alike, both the 5K and 10K courses took advantage of the open spaces of the Lakefront Trail and participants spent most of their time running in the sun, rather than in the shade (where those ten degrees felt a lot less friendly).

Still, most runners didn’t spend much time standing around the starting or finishing lines before or after the race, opting instead to spend pre- and post-race downtime inside Soldier Field’s United Club, which once again served as basecamp for the race. Reasonable start times (9am for the 5K, 9:20am for the 10K) kept runners from waking up too early, an expanded array of food and beverage options from the concession stands were available after the race (each participant was given a ticket for one beverage and one food item) and a live cover band kept the mood lively.

But not only did this second annual race set on Super Bowl Sunday not see a gain in participation, it actually saw a bit of a drop in number of runners. And that’s unfortunate, considering that the race took what worked last year and maintained or improved on it. With the location and the support, this race has all the makings of a large race with less than 500 participants overall (there were almost 800 last year). Maybe the connection between Super Bowl Sunday and running isn’t there yet or maybe it’s just the cold weather (I talked to one runner who said he was only there to run with a friend for his birthday but otherwise would never consider running in ten degrees), but the Chi-Town Big Game 5K/10K has plenty of room to grow its audience. It’s definitely delivering the goods.

Course: The race starts and finishes on Waldron Drive, just south of Soldier Field and mostly follows the Lakefront Trail (south to 31st Street for 5Kers and 41st Street for 10Kers). Considering the temperatures and small field of runners, this is a fairly ideal setup and allowed for some incredibly scenic views on Sunday. The entire course was very well-kept with very little snow, despite recent snowfalls.

Organization (gear check, etc.): Packet pick-up was offered at all three Fleet Feet locations the week before the race as well as on race-day. I said it last year and I’ll say it again this year: setting up basecamp inside the United Club is an especially welcome treat any time of year, but in the middle of an especially cold winter day, it’s ideal.

Goodie Bag (includes shirt): The shirt is a bit lackluster in design (long-sleeve and moisture-wicking with a small version of the race’s logo on the left side) but the cap for the 10K is impressive (as is the fleece cap for the 5K, though it’s the same one as last year’s). Race bibs included tickets for one beverage (including beer) and one food item from the United Club concession stands.

Weather: Surprisingly pleasant for such a cold day, the sun fought back against the low temperature. (Zach Freeman)