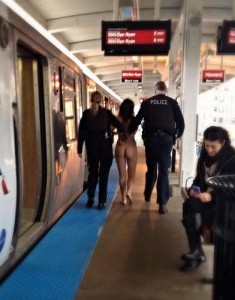 If you follow Chicago transportation news, Molly Rose Lewis, a local actress and playwright who’s collaborating on “Right of Way,” a new theater piece about traffic safety, may look oddly familiar. She’s the woman texting in the foreground of the famous photo of the self-proclaimed “goddess of the train” at the Red Line’s Granville stop.

As you’ll recall, last November a nude, thirty-one-year-old woman on an El car announced she was going to drive the train and ordered the other passengers to get off, before she was carted away by the authorities. Part of what made the photo funny to me was that Lewis appeared to be oblivious to the Botticellian scene behind her.  Actually that wasn’t the case—she was tweeting a photo she’d taken of the woman’s feet. “So there’s a weird circularity to the image,” Lewis says.

She turned the story into a vignette for the current production of “EL Stories,” a show by her troupe Waltzing Mechanics, based on true tales from CTA riders, which reached its hundredth performance last month. “I came up on the platform and people said, ‘There’s a naked lady on the train,’” she recalls. “I thought it was going to be a crazy old woman, but the funny thing was she was not only young but gorgeous and laughing, so it was a weird thing of the reality being different than my expectations.” Another actress portrays the Venus de Granville in the show, wearing a flesh-colored body stocking.

Lewis moved here from downstate in 2012 to pursue theater and began bike commuting for the first time last spring, an experience which has informed her upcoming project. “It was kind of scary, but also empowering and awesome,” she says. She and her “Right of Way” writing partners, Thomas Murray (Waltzing Mechanics’ artistic director), Amy Hopkins and Tina Frey, were inspired to create a piece about interactions between bicyclists, pedestrians and drivers by the case of fallen cyclist Bobby Cann.

Cann, a Groupon employee widely described as an evangelist for safe cycling, was killed on his bike last May in Old Town by motorist Ryne San Hamel, who was allegedly drunk and speeding. The driver has been charged with reckless homicide. “We’re talking with Bobby’s family,” Lewis says. “They’re very interested in participating, but because of the court proceedings they’re not sure if they can be on board.”

She says the writers would like to focus on Cann’s case because it was widely covered in the media, which helped force the Illinois Department of Transportation to lift its ban on protected bike lanes on state roads within Chicago. “If we can’t make it about Bobby, unfortunately there are plenty of other tragedies to talk about.”

The piece will use interviews with Chicagoans about things that have happened to them or people they know, good or bad, while biking, walking, and driving, as source material. Actors will reenact their experiences on stage, a similar process as “EL Stories.” “The theater scene can be very insular,” Lewis says. “But Waltzing Mechanics’ stories come from people in the community, so they can have social relevance, and maybe even effect social change.”

So far the playwrights have mostly been collecting stories from friends and family for “Right of Way,” but they’re seeking to widen the net. If you’re interested in participating, email talk[at]waltzingmechanics.org to schedule a phone, Skype or in-person interview.

Participants are asked what modes of transportation they use, whether they follow the rules of the road, and what distracts them when they’re traveling. They’re also asked how they feel about people who use different modes, whose responsibility it is to ensure safety on the road, and how can we create safer and more efficient streets. To me, the answer to that last question is obvious: convert as many car trips as possible to walking, transit or bike trips.

Once the playwrights finish compiling the interviews, they’ll have a better sense of the structure of the piece, Lewis said. While each “EL Stories” performance features thirteen stories in succession, in the earliest stages of “Right of Way,” the playwrights considered using a cyclical structure. The idea was to feature a story about a bike rider who was injured or killed by a driver, followed by a tale of a pedestrian who was injured or killed by a cyclist, and then one about a motorist whose injury or death was caused by someone on foot or bike.

The problem with that concept was that while drivers killed twenty-two pedestrians and four bicyclists in 2013 alone, there have been zero reports of people on bike or on foot causing the traffic deaths of others in Chicago for decades, if ever. Structuring the piece that way would have implied vulnerable road users and folks in 3,000-pound vehicles share a level playing field, which obviously isn’t the case.

Lewis acknowledges that, and it’s clear she understands the larger issue: the need for people to empathize with others on the street as fellow human beings, just trying to get where they need to go in one piece. “I drive, but I also ride a bike,” she says. “I get mad at bicyclists when I’m in a car, and vice versa. The problem is, many people who don’t ride bikes already have negative responses to bicyclists, so we don’t want the piece to be overly didactic or alienate them. We want to spark dialogue and bring people together.”