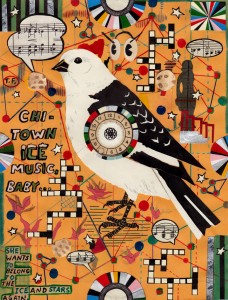 The other night at the Peggy Notebaert Nature Museum in Lincoln Park, an event celebrated the publication of my friend Joel Greenberg’s fascinating natural history account of the extinction of the passenger pigeon, “A Feathered River Across the Sky.” It is a remarkable book about the squandering and wholesale slaughter of a single species.

In 1860, a single flock of passenger pigeons so huge and in such great volume took two days to fly over. The estimate is something like three billion birds. So many that the sky was darkened; a phenomenon reported on many other migratory paths as well. It must have been almost unfathomable that these birds would ever NOT be in the world. A scant fifty years later, they were gone. The last one, “Martha,” died in captivity in a Cincinnati Zoo having never flown or even been in the wild. It is almost impossible to believe that this hearty species, a bird that could swallow acorns whole, could be wiped out in such short order.

There were “pigeon shoots” where, for days on end, yahoos with birdshot would blow them out of the sky and lure them to blinds and blast them at will, with no bag limit. One could kill as many as one could carry. They were often thrown to their pigs as a cheap food source and served in restaurants as squab.

The only grace note the extinction of the passenger pigeon affords us is that the idea of the conservation of endangered species came to the forefront. That the bounty of wildlife this country was so blessed with might NOT be endless.

Greenberg’s book is a detective story, cautionary tale and natural history of a species we decimated perhaps because its outsized appetites were too much like our own.  This book is every bit as vital as Rachel Carson’s “Silent Spring.”

A couple of years ago, while the painter Jenny Scobel was in town, we ran across what we thought was a dead bird in the street. Jenny is one of those sweet souls who brings wounded animals home and winds up with a menagerie. We stopped and Jenny went out to pick it up. It was a beautiful bird that looked to be some kind of woodpecker. While holding the bird, she jumped for a second as she realized the legs and wings were beginning to move, and then the eyes opened. Not only was the bird not dead, but the plucky little bastard wanted to fight. She wasn’t quite up to flying yet, so we put her on the ground and she just kind of hopped as though drunk. It seemed she was still in shock. After bringing her back to my studio, a consultation with a bird guide helped identify her as a yellow-bellied sapsucker, which actually is related to woodpeckers.

What amazed me is just how beautiful this bird was. The reds and yellows and black and white and ochres really knocked me out. I’d never held a songbird before, and had not ever realized how fragile and tough they are at the same time.

Our best guess is that she’d flown into a windshield and knocked herself out and she was by no means ready to re-enter the wild yet. She’d have been easy pickings for some cat or coyote.

We found a bird-rescue operation and within thirty minutes, a humorless woman with a bag walked through the door and gently placed the wounded bird in the bird-sack. She eyed us suspiciously. I assured her that the bird hadn’t bounced off of our windshield, and she gave me a wary look and wordlessly left the studio. I guess all of her excess personality and compassion is reserved for her feathered friends.

This encounter made me seriously start looking at birds again; I’ve been fascinated with them since childhood. I rigged some bird feeders in the back yard and every morning is a miracle. Sometimes thirty different species of songbirds show up at my feeder—sparrows, juncos, blackbirds, finches of every kind and, here and there, the odd warbler, as well as cardinals. I don’t know what it is about them that makes me so happy, gives me such peace and fills me with such wonder. Perhaps it is the idea that nature isn’t something a hundred miles away; that it surrounds us and makes city life more bearable and beautiful and wondrous—and it doesn’t cost you a thing.

Emily Dickinson once wrote, “Hope is the thing with feathers.” For a broad who didn’t get out much, she knew her stuff.

About ten years ago, a few days before Christmas, I spotted a white bird with black wings right outside of Marshall Field’s downtown, on top of a mailbox. The birders reading this will shake their heads. This bird at that time would have no business being there, or damn near anywhere south of the Arctic Circle. I was astonished. It could not be a mistake; no other bird looks like this one. I looked around and realized I had nobody to tell. Cell phones (or at least mine) didn’t have cameras yet. So I just stared at it.

People shoving by me in the bustle of shopping—a guy dressed like a Dickens elf pimped hot chestnuts about twenty feet away—and here was this bird, just looking around. I wanted to be able to stop the whole city in its tracks and point him out; to shout at the top of my lungs, “There is a snow bunting in the middle of downtown Chicago! This is really fucking RARE! Christ, go buy a lottery ticket. This is a sign!!!”

Still, nobody knew it, except me and the bird. And not a day has gone by that I haven’t thought of that bird. That maybe it is my grandmother, a visitation of sorts, or my father, or the many dead friends, or more likely, just a lost bird that crossed paths with the right guy who needed to be reminded of life’s magic and circumstance. What Paul Auster once called, “The Music of Chance.” Maybe it was that.