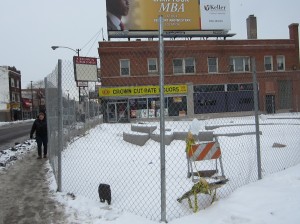 Surrounded by chainlink fence and blanketed with snow, a new plaza under construction at the northwest corner of Milwaukee/Diversey/Kimball in Avondale, an intersection that appears several times in the movie “Wayne’s World,” currently looks pretty bleak. However, once it opens to the public later this year, the triangular slab of land is likely to become one of Chicago’s most vibrant public spaces.

Formerly a drab concrete traffic island occupied by a couple of trees, a bus shelter and a shabby newsstand, the wedge is being transformed into Woodard Plaza, named after the roadway that previously formed its northern boundary. The Chicago Department of Transportation has closed a short stretch of Woodard to connect the island to the mainland, creating a larger space that will house a small amphitheater, a raised performance space with power outlets, and a plethora of new greenery.

The project is part of CDOT’s Make Way for People initiative, which seeks to enhance the public way by creating more and better places for people to relax, socialize and maybe take in some culture. So far the program has led to six People Spot mini parks being built in parking spaces, and the creation of the Gateway seating area at State and Wacker. There have also been projects to enliven several existing plazas in Woodlawn, Little Village, East Garfield Park and Old Town with public art and music performances. The department currently has a request for proposals out for a partner to activate forty-nine underused plazas across the city with new amenities and programming.

According to CDOT Complete Streets Director Janet Attarian, community members, including arts organizations from the nearby Hairpin Arts Center, and the owners of Crown Liquors, just north of the plaza, recognized the Avondale traffic island as an underused asset. 35th Ward Alderman Rey Colón brought the idea of creating the new plaza to CDOT, Attarian says. The roughly $500,000 project is largely being bankrolled through tax-increment-financing dollars. 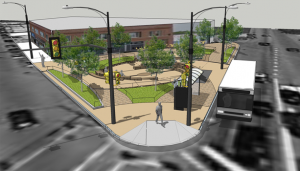 CDOT rendering of the new plaza.

“I think it’s really exciting that we’re removing asphalt for cars and making a place for people,” she says. “It was really nice that a large group of people got involved with the design process.” The plaza will feature a swirling, oval-shaped seating area with seating walls made of precast concrete. The center of the amphitheater would work well for intimate performances by solo musicians, jugglers and other performers who don’t need a lot of space. Larger and louder acts can use the raised performance area at the north end of the space.

The plaza will feature eight new trees, and the amount of permeable surfaces is being increased eightfold, from a mere 185 square feet on the traffic island to 1,500. Five large planters, featuring native plants, will soak up and filter storm water, including runoff from the neighboring streets. That will prevent an estimated 4,434 gallons of water from entering the sewer system every time an inch of rain falls, a step in the right direction toward alleviating Chicago’s chronic flooding problems.

Located at the junction of three major streets, the plaza will get plenty of traffic noise. “Unfortunately, it’s not going to be a very quiet space,” Attarian concedes. “Hopefully by making the space bigger, so performers can be further from the street, and having trees and landscaping to help muffle traffic noise, that will make it easier for people to hear the performers.”

Voice of the City, an arts group based out of the Hairpin building, was part of the team that helped brainstorm ideas for the plaza. They’ve committed to helping maintain the space, and they’ll be involved in organizing performances. “We’re really happy with how the design turned out,” says executive director Dawn Marie Galtieri. “CDOT did a great job with it and they were really open to community input.”

Associate artistic director Christopher Ellis says dance, circus arts, theater, spoken word and live music performances are all likely candidates for the new plaza. “We’ll have to see what the space looks like when it’s done,” he says. The space is slated to open in late spring or early summer. “The possibilities are endless.”

The liquor store, which also runs a tap room next door, plans to open a sidewalk café where customers will have a great view of the performers. “We’re going to have burgers, wings, things that you can enjoy out there on a nice summer day, which is really nice to think about right now,” says Lourdes Arencibia, who helps her mother manage the business, as well as several buildings in the area.

“We think the new plaza is going to be great,” she says. “Aesthetically, the corner’s going to look so much better, and the cutout [where Woodard previously cut off the traffic island] was an accident waiting to happen. There were many near misses and people would get irate.”

Has she heard any objections to the new layout? “Oh yeah, people say they don’t have the same access they did turning off of Kimball onto Milwaukee.” She added that Colón is looking into the possibility of changing the direction of a nearby one-way street to make it easier to access Milwaukee from Kimball. “But people will always find something to complain about.”