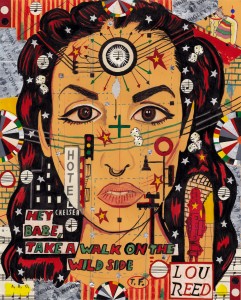 There is a very expensive steakhouse in Brooklyn called Peter Luger’s that, for more than a hundred years, has served what’s thought to be the best steak in New York, or the country for that matter. And when you eat their beef, it is hard to argue with this appraisal. It melts in your mouth. It is perfectly seasoned and cooked at a very high temperature in butter. The Luger’s steak is delicious. No argument. The service leaves a lot to be desired, though: snotty old Kraut waiters, a long wait even when you have a reservation, and the light so bright, you’d think you were in an operating room.

For many of the years that I knew Lou Reed, this was his favorite steak and we ate a lot of it. We’d often go with a big group, five or six people at least. Luger’s was less likely to fuck you around if it was a big table. Over the years, Lou brought Salman Rushdie, Hal Willner, the musical genius, Laurie Anderson and a host of dudes from his tai-chi classes, including the instructor.

I brought my friends Nick Bubash, Mickey Cartin,  Joe Amrhein, and various other miscreants. Our crowds mixed well and during dinner we’d talk about art, music, politics and exchange the latest dirty jokes. Salman Rushdie has a deep cache of hilarious dirty jokes. I was always amazed at his sense of humor. For all that he had been through—it isn’t everyone who has the leader of a country put a price on his head—he was and is funnier than hell. It was also interesting to hear him discuss books and authors. At one dinner, he explained a petty pissing match between V.S. Naipaul and Paul Theroux, who’d written a scathing book about their friendship and its undoing. Salman explained that the notoriously thin-skinned Theroux was pissed that Naipaul no longer wanted to be friends and wrote a book about it. It was nice to hear that great writers were just as petty and vindictive and juvenile as the rest of us.

Often, toward the end of the meal, there would be a pile of steak bones that still had a lot of meat on them. Lou and I would chew the meat off of the bones. we’d just flat-ass pick up the bones and start gnawing on them like a couple of terriers. The great thing was Lou made noise while he gnawed, not unlike a growl, and it was funnier than hell. What was great was that after the notoriously aloof service by starch-shirted elderly Huns, there were a couple of guys loudly chewing on bones, and didn’t give a fuck who heard it—and one of them was Lou Reed. What were they going to say? “Hey, Lou Reed! Stop chewing on that bone of the steak you just paid for.”

I can tell you how THAT would have gone.

Later on, Lou became a fan of Wolfgang’s, which was opened by a bunch that used to work at Luger’s, the late, great West 63rd Street Steakhouse across from Lincoln Center or, in a pinch, the grand old war horse of Manhattan steakhouses, The Old Homestead. There is something about steak to kids who were raised working-class. They enjoy it more. It is always a treat, even if you can eat it every night.

If you haven’t guessed yet, I’m drawing the song, “Walk on the Wild Side.” It is the first song of Lou’s I ever heard and, at the time, it spoke to me in a way I didn’t quite understand; like a dog whistle for people who knew they were going to be “other.”

One night in Manhattan, my friend Bob Chase and I met up with Lou  to attend a benefit for Prospect. 1, the first-ever New Orleans Biennial. It was at the Core Club, a kind of fancy-schmancy, arts-positive club that had graciously agreed to host the event. While standing outside, Lou told us of how “Walk on the Wild Side” came into being. It was initially written for a musical based on Nelson Algren’s novel of the same name. When the financing failed to materialize, Lou switched out Algren’s New Orleans demimonde for Warhol’s Factory denizens and achieved the only top-forty hit of his career.

“It took about twenty minutes,” he told us.

Never before had radio had a song that spoke so clearly to the “other”—junkies, gay people, artists and other square pegs who existed in the margins of American life.

This is how and when Lou Reed first entered my life.

The first time I heard it I was in eighth grade, wearing black pants, a white shirt and a red tie (the Catholic school uniform of St. Pius X) and I remember thinking that I didn’t know completely what this song was about, but I knew it had something to do with me. It was good and someday I would be able to do something about it and not be standing around dressed like a mental-defective.

It was one of those moments that set me free and let me know that there was another side.

It probably isn’t Lou’s best song, but it is the one that reached into the white-bread heart of America and announced that the freaks and misfits and others who chose a life outside of the lines weren’t going anywhere to hide anymore, and this was not a small thing. Lou broke down the door, and the rest of us got to walk through it.