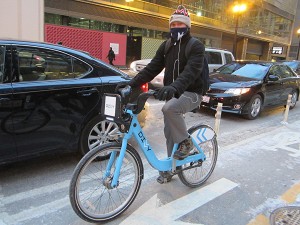 From its June 28 launch to New Year’s Eve, Chicago’s Divvy bike-share system racked up an impressive 759,788 rides. But the acid test for the new system has been the remainder of this kidney stone of a winter, Chicago’s fifth snowiest on record, featuring more than twenty days with subzero lows. I checked in with general manager Elliot Greenberger to see how Divvy has been faring during the Chiberia deep-freeze. “Weather has been a challenge this winter, not only for us but for all kinds of transportation systems that have been around for decades,” he says.

The biggest difficulty of keeping Divvy running has been making sure the docking stations are clear of snow when people return their bikes, which has been tricky since we’ve had so many days of precipitation followed by frigid temperatures. Crew members have been using shovels, ice picks and road salt to keep the docks clear.

However, maintaining the bikes themselves hasn’t been a big problem during the cold season. “There have been no major issues with mechanical problems or tires losing their pressure faster,” Greenberger says. “But with all the dirty snow, keeping the bikes clean is a challenge. They don’t look great, but it’s nothing we can’t solve with a rag and some cleaner.”

Since ridership drops during the winter, the docks are stocked with fewer rides. There were 2,400-2,500 bikes out on the street at a time during the peak season, but nowadays there are only about 1,800.

Despite the nasty weather, Greenberger said “ridership is about where Divvy management expected it to be.” The highest bike use last year took place in September, with 203,487 rides. Divvy projected that winter ridership would be fifteen-to-twenty percent of that, but December was relatively strong, with 44,457 trips taken, about twenty-three percent of peak ridership. However, In January there were only 25,031 rides.

“Not only did we have cold weather in January, but we also shut down operations for a few days,” Greenberger notes. The system was put on lockdown for a heavy snowstorm in early January, then closed again a few days later during a period of frigid temperatures and dangerous wind chills, but there haven’t been any shutdowns since then. “We erred on the side of caution at first,” he says. “But when there was a second Polar Vortex with more subzero temperatures, we kept the system open and there were still hundreds of trips on those days.” 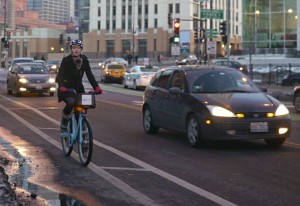 A couple of interesting ridership patterns have emerged this season. As long as temperatures stayed above thirty degrees, ridership stayed relatively strong, with thousands of trips per day, Greenberger says. However, it dropped off sharply once the mercury dipped below freezing. Trips also tend to be shorter in cold weather, averaging nine-to-ten minutes during January versus eighteen-to-nineteen in August. That’s not a shocker, since presumably fewer people are joyriding Divvies in the dead of winter.

Despite the ice-slicked roads, there doesn’t seem to have been a spike in bike-share crashes this winter. From June 28 to November 7, seven crashes were reported to the company, a modest number when you consider the hundreds of thousands of trips that were taken during this time. However, from November 7 through last week, there were zero reported Divvy crashes. Greenberger thinks this might be due to winter cyclists being more experienced than their fair-weather counterparts, and motorists being more likely to obey the speed limit and drive cautiously when conditions are hazardous.

To recognize tenacious cold-weather pedalers, the company recently held a Divvy Winter Olympics promotion, awarding digital medals to members who rode multiple times between December 1 and February 16. Three-hundred-and-thirteen people won gold medals by taking fifty or more trips during this period; 586 garnered silver medals by making twenty-five-plus trips, and 2,445 won bronze by taking five or more trips. “This was a great way to spread the news that cold-weather biking is not only possible, it’s fast and fun.” Greenberger says. “It helped clear up the misconception that nobody rides in winter.”

While the news about winter ridership is encouraging, a shadow on Divvy’s expansion plans was the January bankruptcy of Montreal-based Public Bike System, aka Bixi, which supplies bikes, stations and software to Alta Bicycle Share, the contractor who manages the city’s system. While this could potentially delay the rollout of an additional 175 stations slated for this year, city officials have said they don’t expect the bankruptcy will cause major problems for Divvy operations.

On the bright side, if Bixi goes out of business, Divvy and other Alta-run systems would likely be able to source parts directly from the subcontractors who currently sell them to Bixi. One advantage of this would be that Alta would be able to stop using Bixi’s notoriously buggy software, which was blamed for power losses to Divvy stations during its early days, and switch to a more reliable version. Greenberger declines to say much about this topic. “We’ll have to see what happens when the bankruptcy proceedings are finalized, which we hope will happen within a few weeks.”

Despite the travails of running bike-share during Chicago’s nastiest winter in recent memory, Greenberger is upbeat about how things went. “This season was particularly harsh, but winter itself isn’t a bad season for biking,” he says. “Hopefully next year we’ll have a milder season—that’s the one thing I would change about this winter.”