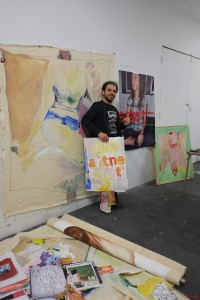 I don’t often pay any attention to the Whitney Biennial—to me it has always been like prom night in the art world. It also seemed hopelessly stacked in favor of New York  artists and my friends used to refer to it as the “New York Biennial.” When I read that two of the curators, this year would be Chicagoans, I was a little interested but not much. Both Anthony Elms and Michelle Grabner are eminently qualified choices and wound up doing a great job but at first—again  it is at the other end of the pool for me—I’m in a different art world. In fact, it’s debatable whether I’m really in at all anymore, but this is a different story.

What is edifying to me was a view of the list. For the first time that I can ever remember, the list of artists for the Whitney Biennial actually seemed like a survey of American art. It felt democratic and everyone was represented—in particular, Chicagoans, and not the usual suspects. It does my heart good to see Dawoud Bey in this show. For years he has made a dignified, relentless and ever more fascinating body of work. He has also been a mentor, confidant and luminous example of what is possible for an artist in Chicago.

I was also thrilled to see my friend Pedro Velez take the thing by storm. His exhibition is one of the most talked about in the whole show. It is also very much like him: combative, contrary and provocative.

What I’ve always liked about Pedro is how unafraid of power he’s been. We became acquainted while working for Artnet, and we could not be more different. We had wildly different ideas about art and what was art and what wasn’t. We were a good balance for Artnet: Pedro the restless searching critic who went to great lengths to shine a light on art other people were missing, and me, an artist who would write about everything BUT art. We had an endlessly patient editor in Walter Robinson and when a Russian zillionaire bought Artnet, his first order of business was getting rid of us, as well as the voluble Charlie Finch, who was a bull in the art world’s china shop.

A few months later Pedro and I became unlikely roommates, due to circumstances having to do with his inclusion in the Biennial and subsequent relocation to New York.

In those months I learned a lot about the end of the art world he inhabited and he learned a bit about mine. And as unlikely as it may have seemed, we became good friends.

I watched this guy get up early every morning and take the CTA way south to his teaching job, get back in the late afternoon and head straight to his studio. The guy worked harder than a ten-dollar hooker at a Teamster’s convention.

He is younger than me, and I remember agonizing over work for a big show—the sudden flush of interest from big-deal collectors—and the smarts with which he pulled it all off. At the age of forty-three, he’d suddenly arrived. From a small town  and a working-class family in Puerto Rico, Pedro climbed the mountain of broken glass, paying dues all along the way; he did it the hard way and he made it.

His photos, collages and paintings that challenge the power structure of the art world and the big world as well, are funny, lovely and corrosive—sometimes all at once.

My dog Chooch misses Pedro immensely (Pedro calls him “Shoosh”—it’s funny as hell) and it’s been a while since I’ve heard him singing Metallica songs at the top of his lungs at 8am. Somewhere I hope he is treating his neighbor to this lovely sound.

It is also a point of pride here at Newcity being that Pedro has a long association  with this publication. So forgive us  a bit of pride for one of our own. Well done pal. You earned it.

I’ve watched a couple more episodes of “Chicagoland”—episodes three and four to be precise—and again, I don’t quite know how to feel about it.  We meet Dr. Andrew Dennis and watch this fine man agonize over losing a patient and, when the patient’s back story is revealed, it is even more sad. Dr. Dennis impresses us as one of those compassionate committed doctors, who has his share of ghosts. Again the filmmakers handle this deftly and a man’s death is  genuinely felt. In lesser hands, this could have become the pornography of grief.

Rahm again comes off like the white knight, and I’m beginning to wonder just how much access the filmmakers had. Emanuel, a master of controlling the message, seems to be a half-step ahead of  this the whole time. At a naturalization ceremony, Rahm Emanuel comes off like Mr. Chips. In fact throughout most of the next two episodes, I don’t recognize Rahm.

In fact, all of the “Jolly Cholly” shit would be funny, were twenty percent of our citizens not living in poverty, and were we not having charter schools foisted upon us. Were there not potholes you can fall to your death in. It’s more than a little disingenuous to render Rahm in hues of sunshine while he is kicking a board up our ass.

There is so much here that is well done—in fact masterfully done—one just wishes that these filmmakers had the same unfettered access to Rahm Emanuel that they had to Cory Booker in Newark, for the stellar look at that town in “Brick City.” Here’s hoping that Emanuel, in total, comes into focus.

This is brilliant -just when Fitzpatrick is looking all played out -he confounds while reinventing himself via this foray into nonsensical farce! It just goes to show, it ain’t over ’til the Fat Lady’s sings.