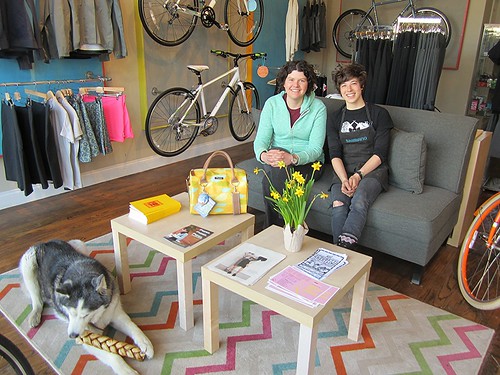 Let’s Go Ride a Bike blogger Dottie Brackett once gave a presentation on women’s cycling where she recommended Dutch-style bikes with upright bars, fenders, chain guards and skirt guards as being practical for commuting in nice clothes—save for one clothing item. “I can wear any kind of skirt on this and be fine, except for a pencil skirt,” she said. “So I don’t wear pencil skirts.”

However, the Holy Grail of a bikeable pencil skirt is now available at BFF Bikes, Chicago’s first female-focused bicycle store, which opened on March 15 at 2113 West Armitage in Bucktown. Last week co-owner Annie Byrne showed me how the stylish black garment, made by Seattle-based Iva Jean, works. “When you open the zipper in the back, it converts from a pencil skirt to an A-line skirt so you can get full leg extension while pedaling without having to hitch it up,” she explains. Then she dumps a bottle of water over the high-tech fabric. “It rolls right off it like Teflon.”

This clever garment reflects the BFF mission of making cycling more accessible to women. Byrne, a former urban planner, and her business partner Vanessa Buccella, who works as a video editor for WGN, met through the local racing scene, where males far outnumber females. “A typical men’s race field will sell out, but there might be a field of twelve women,” Byrne says. “We got tired of racing against the same people every time.”

Inspired by female-friendly shops like Gladys Bikes in Portland, Oregon, and Adeline Adeline in New York City, they decided to open a store that would offer a welcoming environment, a broad range of women’s products, and a sense of community. “As women cyclists making the evolution from being newbies to someone being deep into racing, we saw more women biking each year, but it was still tough to find women’s gear. And meeting other female cyclists can be tough if none of your friends like to bike as much as you.”

Since they had trouble getting a startup loan from a bank, in January they launched a crowdfunding page that raised $13,029, enough money to cover themselves in case they didn’t turn a profit in their first months of operations. The shop has come together nicely since then, with an atmosphere that’s less like a typical scruffy, male-dominated bike store and more like the boutiques around the corner on Damen.

Pastels dominate the color scheme, there’s a dressing room (a rarity in cycle shops) with a plush ottoman, and a comfy couch with a coffee table topped by daffodils. Needless to say, BFF has the cleanest bike store bathroom I’ve ever seen. Scout, a handsome husky, stands guard over the premises. “The store has a nice, trendy vibe,” says neighborhood resident Anne, who holds her baby boy Morgan in a sling while her husband Alex takes his road bike for a tune-up. “It fits well into Bucktown, but it also feels like Brooklyn.”

But BFF has substance as well as style. Practical, fully accessorized city bikes by PUBLIC are available, as are hybrid and road cycles from Giant and Bianchi. There’s a wide range of parts and accessories that would be of use to any cyclist—most of the customers I see while I’m there are male—but the wide range of gear for women makes the store unique among local shops.

One unusual shop policy is the “saddlefaction” guarantee, whereby customers can try out a seat for a few weeks and return it if it turns out to be a pain in the ass. “So often you hear from women who just bought a new bike, ‘The saddle—it’s so uncomfortable!’” says Byrne. “So we want to make sure they get a seat that really works.”

Classy bike bags by Chicago-based Po Campo are for sale, as well as jewelry featuring the store’s broken-chainring logo made by Ukrainian Village resident Elise Johnston. Other gift items on display include wine glasses, tote bags and baby onesies emblazoned with racing bikes.

Taking a break from truing a wheel, mechanic Lauren Wiscomb tells me business has been steady since they opened, which is impressive considering the still-frigid temperatures. She’s a three-year veteran of Turin Bicycle who wrenches at BFF along with Steven Blum. They’ve already sold a few PUBLIC bikes and a Bianchi racing cycle. “I assume it’s going to get really busy as soon as it gets warm out. At most bike shops, spring starts with a trickle that turns into a flood.”

BFF has a large chalkboard displaying upcoming women’s bike events, such as the Women on Wheels summit on Saturday, April 12, 9am. to 2pm in Dvorak Park, 1119 West Cullerton in Pilsen, covering topics ranging from basic repair skills to cycling with children. The store will soon be leading brisk weekly training rides, as well as social rides at conversation pace.

Last Friday BFF held a grand opening party featuring a DJ and a fashion show with members of the shop’s racing team modeling cycling gear by Terry and Velocio. The highlight of the night was “roller karaoke,” which is karaoke performed while pedaling—and balancing—on training rollers. “I can’t even ride rollers but Vanessa can do it while riding with no hands and dancing,” says Byrne. As evidence, check out a video of Buccella at tinyurl.com/bffbikes, performing an impressive lip synch to Beyonce’s “Countdown.”