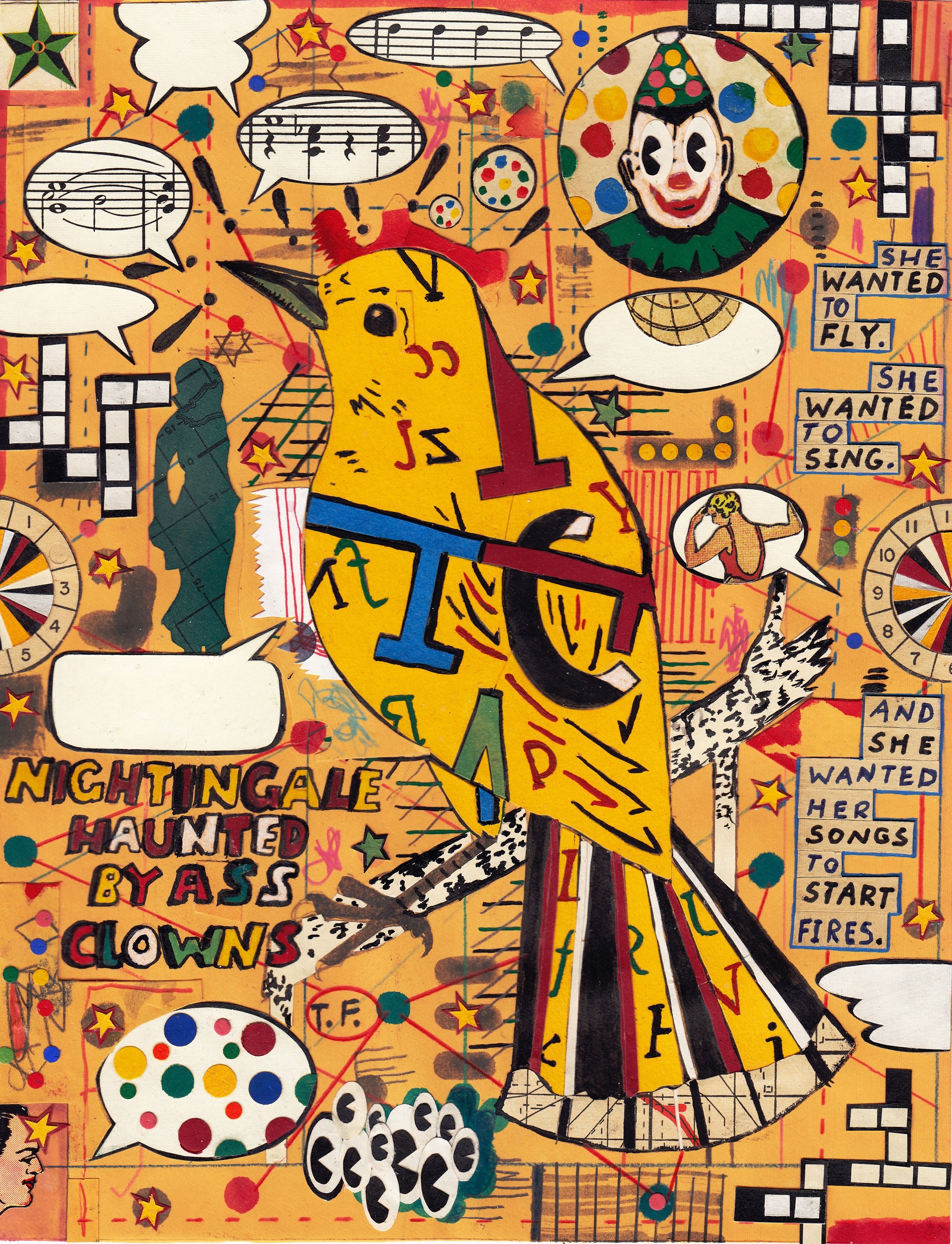 When kids are in high school, doodles usually adorn every surface of their textbooks—at least they did on mine. I loved scribbling on the back of my tablet, or in the margins of my history book, or just on looseleaf and in notebooks. Anything was better than listening to the teacher and taking notes on whatever useless drivel they were going on about. I could be drawing anything: hotrods, planes, Rat Fink, giant dicks, monsters, birds, tits, monkey heads and always band logos and comics—a character named “Bong-Man” and word balloons containing thoughtful utterances like “Shimmy-Shimmy beat my meat,” “Transistor Sister” and “Maggot-Brain.”

What I’ve most enjoyed about making my “Lunch Drawings” is just how much they remind me of those drawings I made trying to escape the mind-numbing dog-shit they tried to teach me in school. With very few exceptions, my teachers talked like rolls of toilet paper. One bloodless, colorless factoid after the next, until I had annihilation fantasies about blowing up my high school.

I also had this problem of sometimes thinking something while not realizing I was also actually saying it out loud.

One time one of the Christian Brothers was babbling on some treacle about one of the saints, who I gave not a fuck about. There were some cool saints to hear about, like Saint Heckta, a looney-tune possessing of much feverish faith, who iced some idolators with a broad-axe. He just ran through the pagans like a crazy bitch, swinging and playing Whack-A-Mole with the unworthy. But this Brother only concentrated on the more acceptable self-loathing whack-jobs with their hair-shirts and self flagellation.

On and on in this monotone drone—Brother Leo was the prick’s name. Finally, I just thought to myself, “Jesus H. Christ, will you just, please God, shut him the fuck up?”

I heard some titters of laughter before I realized that I had actually SAID it, and then it was off to the races, with Brother Leo engaging in the not very saintly, nor even Christian act of beating the holy snot out of me. Brother Leo was pissed—his face was as red as a baboon’s ass—and he was spitting while he was yelling and swinging like a madman. For some reason I started laughing my ass off, which pissed him off even more. He screamed “Oh, you think this is funny, Mr. Funny-man!!!” and that did it—I couldn’t control the laughter then. I was laughing so hard my nose was running and I was snorting and the only thing I could think to say was “God, you’re a fucking idiot.” This only prolonged things and finally I got sent to the office where I started laughing again and got suspended.

They told me I couldn’t come to school for three days. Wow. Hurt me. Ouch. Boohoo.

The history I was taught was a lie. The math, I can do with a calculator. The English lit was the boring shit only Catholic schools would teach.

I went to a high school with no windows. At least in grade school, I could look outside at the birds. This became my great escape, and when I drew them, it became even better.

Often the drawings wound up situated in the middle of the crazed and vulgar doodles that I made. I didn’t realize it was my subconscious telling me to broom the rest of this shit and just go somewhere and draw. Eventually I got it. Drawing birds and naked girls became my passport to what the nuns used to call “Tony World.” I liked it there.

I could do whatever the fuck I wanted there. When I was drawing, nothing that the teachers, cops or other pain-in-the-ass authority figures had to say meant dick. It was all a blur and I learned how to shut out the noise. I didn’t know it then, but those drawings were a foundation, the rock on which I built my work.

I still hate authority. Hate bosses. Hate bullies. And still insist on doing precisely whatever the fuck I feel like doing. I still doodle all of the time, eventually it turns into drawings. I still get the same subversive charge out of it. I’m happy that it has allowed me to not have a boss or have to kiss anybody’s ass or answer to any of the swinging dicks. I’m happy that at the end of my pencil is another world and I get to go there, and, if I want, stay there with the birds. I got it made.

“I’m happy that it has allowed me to not have a boss or have to kiss anybody’s ass or answer to any of the swinging dicks.”. Unfortunate you think of all us working slobs as losers..The people who manufacture the paper for this rag you get paid to write for, the workers in the plants that manufacture the art supplies you use, the retail people and their bosses who provide customer service for you,ComEd workers who are part of the chain that provides the power for the lights you paint by. Unfortunate for the teachers who tried to instill good… Read more »