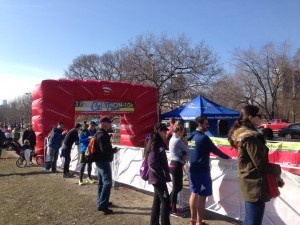 Breakdown:  The little patch of trail between Diversey Harbor and North Cannon Drive across the street from the Peggy Notebaert Nature Museum hosts its fair share of running events throughout the year. And it’s no wonder: it’s in easily accessible Lincoln Park and offers a quick route to the Lakefront Trail—a big requirement for smaller races looking to make use of open trail space. On Sunday, All Community Events put the familiar space to good use for their Chi Town Half Marathon & 10K event.

Just around 1, 200 runners showed up at the starting line (with a little more than half opting for the half marathon). The relatively small field allowed for organizers to start both events simultaneously—not a bad idea considering that the courses were identical for the first five-and-a-half miles (though it did lead to some crowding at the start, and a bottleneck right before the starting line). After circling Diversey Harbor once and heading north for a second round, 10K runners turned off and headed back to basecamp and the finish line while half marathoners went as far north as Foster.

Luckily, some lovely spring weather sweetened the event with sunny skies and temperatures in the forties helping runners enjoy the course. The Chi Town Half Marathon & 10K is a fairly no-frills event on the lakefront but the course was clear, the volunteers were smiling and the chip-timing worked (with printed leaderboards being posted as runners were coming in). A cover band played hits from the nineties to keep things lively.

Course: The 10K followed a familiar course around Diversey Harbor while the half marathon built on that and took runners as far north as Foster. For the most part the course was clear and easy to navigate, with plenty of water stations and volunteers along the way.

Organization (gear check, etc.): Both packet pick-up and gear check involved slightly more elaborate processes than necessary but moved quickly and efficiently. The starting line included a narrow chute that only allowed a few runners out at a time. Perhaps meant to avoid clustering on the course it also caused a somewhat annoying bottleneck at the start.

Goodie Bag (includes shirt): Just the shirt—which is described as a “Thin Tec Hoodie.” What this translates to is a hoodie made from the breathable material running shirts are made from. In essence, it’s a long sleeve running shirt with a hood. It’s an interesting concept and a nice design.

Weather: Sunny with almost no wind and temperatures in the forties and fifties. (Zach Freeman)