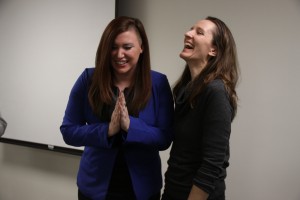 Late March and it’s still like walking through a meat locker outside, cold enough that the fabric of my jacket stiffens as I lumber and linger outside the cab, tussling with the straps of my camera bag and satchel. Too many straps. Finally I get sorted as the cab pulls off, and I raise my gaze, take a moment to study the unassuming gray corporate slab of a building where the Sex Workers Outreach Project meeting is taking place at the Test Positive Aware Network (or TPAN) offices.

I’m in Uptown, a short hike down the avenue from the Green Mill. I’ve only ever been in the neighborhood for events, music and poetry mainly, and tonight it’s activism. I’ve known of SWOP for years, but didn’t feel qualified to attend any of the group’s private membership events, but they are holding their first-ever public event. It’s called, “Understanding Sex Work and Allyship” and I’m curious what this national organization will contribute to the public dialogue about at-present forms of outlawed sexuality, and afterward, find myself reflecting on the social support system they wish to foster, their institutional outreach efforts. And they represent their constituencies well. 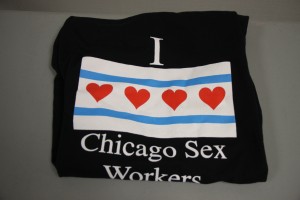 Organized and presided over by Cassandra Dahm and Cassandra Avenatti, they introduce themselves as the “Two Cassandras” that will lead the group through the underworld of sex worker allyship, presumably. Good humored and outspoken, the pair are clearly devoted to their cause, and it shows in their enthusiasm for the assembly. I introduce myself and Avenatti explains that she recently joined the board of the organization, and that Dahm has been involved for much longer. Brief introductions. I find a corner in the room, sitting in, and wait for the presentation to get underway. There are roughly twenty attendees, mostly women in their twenties and thirties, some in business attire, some less so. One woman, a striking blonde, glides in on her wheelchair, a-brick in political stickers. Dahm talks. Starts by having everyone introduce themselves, and it’s interesting, the spectrum of professional identifications: a pro-domme; a lawyer who does a lot of DCFS work who wants to better serve her clients; social workers and family care practitioners; a student therapist who works with the BDSM community; a trans community activist; a woman raised by a sex worker and by her sex worker community of friends who is averse to the fluorescent light because of epilepsy. Avenatti has the lights dimmed, and they start the presentation.

It’s basically a Powerpoint overview of the social misperceptions surrounding sex work, and the services that SWOP provides, ranging from a hotline, tax, “know your rights support” and legal advocacy. There’s a fleeting discussion from the pro-domme about the “pathologization of sex work” and the assumption of damage or mental illness, and Dahm relates this to the perception of pimps who, she explains provide transport, marketing and client management. “We use those terms interchangeably—pimps and management,” she says, going on to discuss the popular media representation of pimps as usually male and African American.

As the presentation progresses, there is discussion of street economies, generational poverty, people engaged literally in survival, and the obvious and very ranging gray area of the legality of sex work as it relates to this, citing the legal difference between the sex work provided by strippers versus escorts versus porn stars. In many ways, sex work is clearly more legal in definition than not in present society, I remember thinking. They discuss the use of blacklisting as a defensive tool to weed out bad clients, and talk about the Bad Encounters Line as a for-instance. Dahm and Avenatti then go on to address other common misconceptions about sex work, including drug use (exists just as it does in other areas of health care), trafficking (most sex workers are not trafficked, though it exists and needs to be addressed as well as it does in forced labor trafficking); consent as it relates to commercial exchange, and the need for decriminalization and basic labor rights as a way of countering isolation and shame. She cites the case of Kim Brandmire in Elgin, who raped and beat a sex worker and then, when the sex worker called for help from local law enforcement, was arrested for prostitution. Offenders, they point out, are quickly hustled off to ineffectual self-help programs such as Prostitutes Anonymous or “John School.” 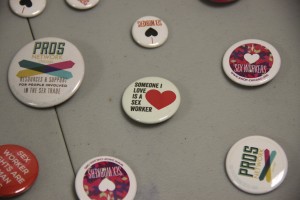 They sum up the meeting with a talk on “Dating, Love and Getting Saucy With Sex Workers,” emphasizing allyship as a matter of respecting boundaries, mindfulness of language and describe the need to resist the urge to play rescuer. Lights up. Everyone filters out slowly, immersed in discussion.

My takeaway is that SWOP should be respected as a union organization, and equally as fighting an important civil-rights battle about equal pay not necessarily for equal work, but one in which those who are not presented with equal life opportunities and are, by most measures, disadvantaged, may follow their hearts and find what more exceptional life they may. This includes the right to be recognized by law as a class of people who deserve equal protections under the law, and receive the same care from society as those who participate in causing and adjudicating its ills. So far, globally, power has sniffed and buried this idea. It is time for sex-positivity to have a chance. And especially since our society has yet even to recognize sex workers as among our fellow human beings. Post-meeting, I sent a few follow-up questions to Avenatti, and below is what followed from the exchange.

What compelled you to take your training workshop public? Why now?

We have been providing trainings for social service agencies for the past two years with great success and increasing interest. It made sense to us to increase access to these trainings for individuals who are either not helping professionals, or who work independently or for organizations that would not sponsor this type of training. The goal is to provide access to information on sex work and allyship for as many people as possible!

In terms of timing, SWOP has steadily grown as an organization in the past two years, thus we now have the capacity to provide additional workshops such as the community training.  These trainings also generate funding for us to engage in our work, which is extremely helpful in a fast-growing organization.

It seemed as though a lot of attendees were in the social services in some way—physical therapists, lawyers, social service people. Is your goal to center this training on professional fields such as this, or is it to some degree eventually aimed at providing training to the layperson? If that’s a part of your thinking, then how do you eventually go about bringing that demographic into the effort? What are the particular challenges of doing so?

It was, actually, my expectation that most attendees would not be service providers, but instead “lay” members of the community—lovers, friends, activists in allied communities. Thus, I created material specifically for “non-institutional/informal” allyship, and included information on dating or loving a sex worker. We did have a number of these kinds of folks at the training, but you’re correct in that a majority were helping professionals.

Now that we have this information, we can better address outreach to potential attendees, and perhaps even consider providing separate trainings for helping professionals and “lay” allies. However, a significant portion of the information in the training would be the same for either population, because it’s relevant for any individual who seeks to support sex workers.