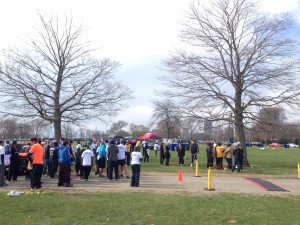 Breakdown:  Rain and wind threatened to put both a literal and figurative damper on this grassroots race organized by Phi Delta Chi (a professional pharmacy fraternity) in Montrose Harbor this morning as the 9:30 starting time approached. But within minutes of runners taking off, the clouds shifted, the rain dissipated and the sun came out, allowing for the small field of around 150 participants (walkers and runners) to get the most out of the out-and-back course along the lakefront trail.

A single well-stocked water station—appropriately situated just after the first mile (and after the second on the way back)—provided runners with hydration and plenty of course attendants were stationed along the way to keep foot traffic going in the right direction. The open course felt plenty wide for the number of runners but the mile markers could use some work; the first evaded me and the second was placed far too early along the course leading to confusion regarding the distance to the finish line (a sentiment I heard reiterated by other participants).

But as with the best smaller races, there was a sense of excitement and earnestness that drove the Phi Delta Chi 5K and made it more than merely another small 5K (an increasingly rare find within Chicago city limits these days). From the proud announcement regarding the money participants raised for St. Jude Children’s Research Hospital to the cheering volunteers along the course and at the finish line the investment in the enjoyment of the runners was palpable. This is only the second year that Phi Delta Chi has hosted this race so there’s plenty of room for growth.

Price: $35 pre-race, $45 race day
Course: Starting and finishing in Montrose Harbor, this course followed a fairly standard route, heading up the lakefront and turning around just north of Foster. Lots of enthusiastic volunteers (and one misplaced mile marker).
Organization (gear check, etc.): Day of packet pick-up was the only option here, but due to the small size of the race it was a breeze, as was gear check (from my perspective it looked like there were only about five checked gear bags, but they were stored safely and drily). Lots of post-race goodies including bananas, various bagels, coffee and water.
Goodie Bag (includes shirt): Like last year, the race shirt is a white cotton tee, but the stylish design belies the negative connotations cotton race tees typically have.
Weather: Forty-five degrees with some light rain at the starting line giving way to sunshine. (Zach Freeman)